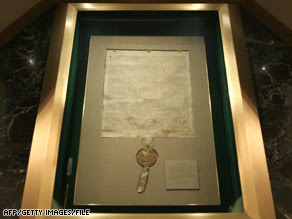 NEW YORK (CNN) -- Just blocks from where U.N. diplomats debate their interpretations of tyranny and democracy, what may be the first document to articulate the difference is going up for sale. The version of the Magna Carta up for auction has been on display at the National Archives in Washington.

The version of the Magna Carta up for auction has been on display at the National Archives in Washington.

Sotheby's will auction off one of the earliest versions of the Magna Carta later this year, the auction house announced Tuesday.

This will be the first time any version of the Magna Carta has ever gone up for auction, according to David Redden, vice chairman of Sotheby's.

The Magna Carta is expected to fetch at least $20 million to $30 million, Redden said.

Redden, who has also sold dinosaur bones, space race artifacts and a first printing of the Declaration of Independence, called the Magna Carta "the most important document on earth."

The charter mandated the English king to cede certain basic rights to his citizens, ensuring that no man is above the law.

Many believe the Magna Carta was the first document to recognize the legal right to freedom from tyranny, an influential concept to American political philosophers -- from the founding fathers to the modern presidency.

The version to be auctioned is one of fewer than 20 known copies of the Magna Carta, which means "Great Charter" in Latin. The document was first devised in 1215, but not confirmed into English law until 1297 -- the year this version was issued and sealed by King Edward I.

The document is one of only two copies of the charter that exist outside of England, according to Sotheby's. This Magna Carta and another version in Australia are the only two ever to have been privately sold.

The version up for auction rested for six centuries with the Brundell family in Deene Park, England, until being bought in 1984 by businessman Ross Perot. Since then, the Perot Foundation has kept the copy on display at the National Archives in Washington.

The Perot Foundation plans to distribute the money from the auction to various causes such as medical research and helping wounded soldiers.

The Magna Carta will be coming up for auction during the week of December 10.

Need help with homework and studies?

HippoCampus is a great multimedia resource with course materials that can help you with your homework and studies.

The Monterey Institute of Technology and Education has launched HippoCampus, a website designed to supplement learning for high school and college students in order to assist with credit recovery and home schooling, as well as AP and general ed use. HippoCampus is an open education resource and is available free of charge to all users.