March 22 (Bloomberg) -- Brian Wesbury, chief economist at First Trust Portfolios, talks with Bloombergs Lori Rothman about the outlook for the U.S. economy following the passage of health-care legislation in the U.S. house. The U.S. House passed the most sweeping health-care legislation in four decades, rewriting the rules governing medical industries and ensuring that tens of millions of uninsured Americans will get medical coverage. (Source: Bloomberg)


We will pick up where we left off in Chapter 22, summary, Monetary Policy; we can begin Ch. 23.

Chapter Overview
This chapter discusses how the federal government is financed and includes material on public choice. Different approaches to a balanced budget are described as is the role of the Federal Reserve. The federal government budget deficit’s relationship to the trade deficit is explained, as are the implications of deficit financing in an open economy. The chapter concludes with a section on the burden of the public debt, considering to whom it is owed, the interest paid on it, and the crowding out effect.

Financing the Federal Government
Defining Deficits and the National Debt 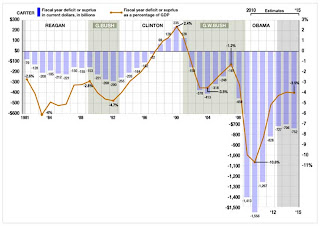 Public Investment and Crowding Out, 7:07


Does the economy self-adjust? If so, what is the role for the government if the economy is not where we'd like it to be? This video takes a brief look at two different schools of economic thought.

Intergenerational Burdens of Fiscal Policy
Fiscal Sustainability of the Federal Budget
Checkpoint: The Burden of the Public Debt
How Much Debt Can We Carry?
Ideas for Capturing Your Classroom Audience
Exactly how large is the national debt? Find out at the Web site called gThe Debt
to the Penny,h which is part of the site of the U.S. Department of the Treasury. The site is located at: http://www.treasurydirect.gov/NP/BPDLogin?application=np.

Your students may be creditors of the U.S. government! Show them how to
assess the value of any U.S. savings bonds they may have been given over time
on the Web site at: http://www.treasurydirect.gov/indiv/tools/ tools_
savingsbondcalc.htm.
For data and other information on the governmentfs budget, visit the sites of the
Office of Management and Budget at: http://www.whitehouse.gov/omb/ and the
Congressional Budget Office at: http://www.cbo.gov/.

Chapter Checkpoints
Financing the Federal Government
Question: Is the absolute size of the national debt or the national debt as a percent of gross domestic product the best measure of its importance to our economy? Why?

The point is to check that students can: comprehend that the amount a country
owes should be viewed in terms of its national output or income, GDP.
Financing Debt and Deficits
Question: Assume the federal government decided to increase spending and lower
tax rates.running ever larger deficits.and got the Federal Reserve to agree to buy
all of the new bonds that the Treasury issued. What would be the impact on our
economy?

The point is to check that students can: integrate the material in the chapter with the effect on the economy when the Fed buys bonds (from previous chapters).

The Burden of the Public Debt
Question: Is crowding-out an inevitable result of deficit spending if the Federal
Reserve does not buy back an equivalent amount from the market?

The point is to check that students can: understand the different impacts of deficit spending when the economy is slack as opposed to when it is at or close to full employment.

Extended Example in the Chapter

How Much Debt Can We Carry?

Alan Greenspan, former Chairman of the Federal Reserve Board, cautioned about
the future threat from growing budget deficits, and at other times backed away from that position. The reason seems to be that his views changed as to how much debt the government can comfortably take on. The higher level of that “danger point” may in part be due to lower interest rates and improved financial markets.

This section references an article by Edmund Andrews titled “Greenspan Shifts
View on Deficits,” from The New York Times (March 16, 2004, pages A1 and C2).

Examples Used in the End-of-Chapter Questions
Question 3 refers to the Laffer curve. You may wish to review the material from the chapter on fiscal policy.
Question 5 references the history of the U.S. government’s budget position, noting
that it has been in surplus on average about one year in every decade. You can illustrate the history of the deficit with the graph from the Web at:
http://www.uuforum.org/deficit.htm.
Question 11 references an open letter from Ben Stein to Henry Paulson after
Paulson was appointed as U.S. Treasury Secretary. The piece is titled “Everybody’s
Business: Note to the New Treasury Secretary: It’s Time to Raise Taxes,” and it
appeared in The New York Times on June 15, 2006. For more on Secretary Paulson,
see the Web site of the U.S. Department of Treasury at: http://www.ustreas.gov/.
Question 14 refers to the roles of Congress and the Executive Branch in managing
the budget. For more about the agencies involved, visit the sites of the Office of
Management and Budget at: http://www.whitehouse.gov/omb/ and the Congressional
Budget Office at: http://www.cbo.gov/.
For Further Analysis
Understanding Crowding-Out
This example can be used as an in-class small group exercise or as an individual inclass exercise. It is designed to complement the text’s material on crowding-out by examining the effect of the deficit on interest rates through the workings of the money market and the bond market. This treatment ties the topic back to the analysis used in Chapter 21, and you may wish to expand the assignment by delving more deeply into the effects in the money market.

Web-Based Exercise
This example can be used as a small group exercise or as an individual exercise.
The exercise provides an opportunity for students to apply the material in the chapter about the Federal Reserve and the government’s budget deficit to an analysis of comments by the current Fed Chairman, Ben Bernanke. The third question provides an opportunity to reinforce students’ understanding of the role of the Fed with regard to Congress and the Executive Branch.
Boomers and the Budget Deficit
In an AP story from January 18, 2007, titled “Bernanke Warns of ‘Vicious Cycle’ in
Deficits: Wave of Retiring Boomers Will Put Growing Strain on Budget, Fed Chief
Says” (available on the MSNBC site at http://www.msnbc.msn.com/id/16688089/)
the Fed Chairman outlines his concerns about future deficits. (Note that he was testifying to the Senate Budget Committee.)
After reading the article, answer the following:
1) Why is the retirement of the baby boomers a problem for the budget deficit?

2) What is the “vicious cycle” about which Bernanke is concerned?

3) What suggestions, if any, does Bernanke make about what Congress and the
administration should do?

Tips from a Colleague
Students are often unclear about the relationship between an annual budget deficit
and the accumulated debt. Using data to illustrate the changes that have occurred
over time helps clarify this. Also, students are not likely to grasp how much they
hear about the deficit at any point in time is based on projections. Comparing the
information on the Web sites of the Office of Management and Budget and the
Congressional Budget Office can point out the differing assumptions being made.
Finally, be sure that students understand the process. The media give presidents too much credit and too much blame.

1. Be sure to review Chapters 20-22 (we will have Tests on this material as well, TBA). Some students have asked to be tested as close as possible after covering the material.

3. As review for HW, typical questions that you may encounter on the actual AP Economics Macro Test are included daily:


1. Technological progress occurs when the economy gets more output

2. GDP per capita is

3. Economists compare how rich or poor different nations are by measuring their

4. Increases in the capital stock will lead to