Is Turkey Looking West, or, Towards the Middle East? 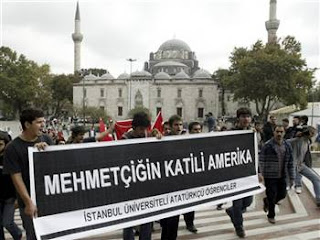 Turkish university students chant slogans as they carry a banner that reads: "Murderer of Mehmetcik is America" during a protest against recent attacks by Kurdish rebels, Istanbul, Turkey, Tuesday, Oct. 9, 2007. Turkey said Tuesday it had given instructions to prepare for a possible cross-border military operation into Iraq to chase separatist Kurdish rebels. Kurdish rebels have killed 15 soldiers in separate attacks in the past two days, increasing anger in the country over the insurgents' ability to find refuge in neighboring Iraq.

In an action that is not going to please the U.S. and will not help lead the Middle East towards stability, the Turkish government is poised to cross the border into Iraq now that Turkish military troops have been killed.

The decision came in a meeting between Prime Minister Recep Tayyip Erdogan and officials from his ruling party.

It is possible that the United States and Iraqi Kurds could take definitive action against the Kurdistan Workers’ Party, or PKK.

In the last 10 days, more than two dozen people — including soldiers and civilians — were killed in southeastern Turkey in attacks by PKK rebels. Labeled a terrorist group by the U.S. and the European Union, it has fought government forces since 1984 in clashes that have claimed tens of thousands of lives.

The decision of Turkey is key because if they act hastily this will jeopardize ties with Western allies.

Turkish soldiers targeted suspected escape routes used by fighters and tracked rebels in the Gabar, Cudi, Namaz and Kato mountains in operations that began after 13 soldiers were killed in an ambush Sunday. Two more soldiers died in explosions Monday.

Turks are naturally furious that PKK rebels, labeled a terrorist organization by the U.S., can carry out attacks on Turkish soil and then slip across the border to mountain hideouts in the predominantly Kurdish region of northern Iraq. Turkey can retaliate by closing the border with northern Iraq, hurting the economy of the landlocked region.

Internal Turkish debates center on the problematic relationship that Erdogan’s party has with its opponents. Erdogan has a situation with his own military, which has put the Islamic-rooted government on notice it will not tolerate any effort to undermine Turkey’s secular traditions.

The PKK is branded a terrorist organization by the U.S. and the European Union. Its war with Turkey has claimed tens of thousands of lives.