The Quiz is today: Chapter 10 Section 3 The Impact of the Enlightenment.

Be sure your name is on both the Scantron and the Quiz.


If your name is not on the Quiz it will not be returned.


HW Avatar is available below (per our usual procedure HW is also posted at the bottom of the daily blog post as well as being posted on GradeConnect):

The Birth of a New Nation

"A Republic Madame, if you can keep it."


For 8th Period (we did not get to it as the other classes did but here for reference):

As an exercise, we can play the part of an American spy as a Patriot working to free America from England's rule.

The Bill of Rights 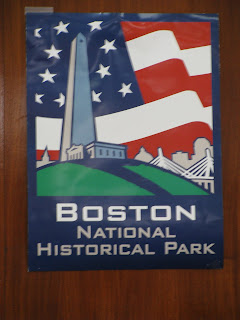 What we did on our summer vacation, Summer 2009 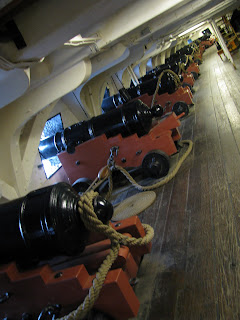 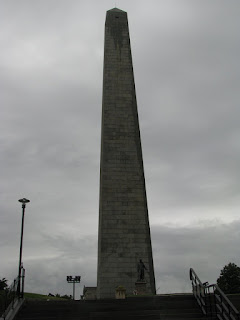 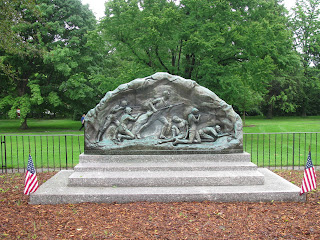 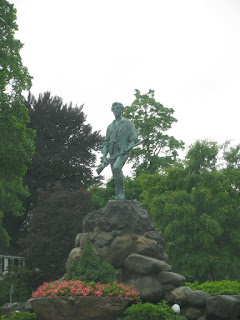 USS Constitution is the oldest commissioned warship afloat in the world. It was first launched in 1797. Constitution is one of six ships ordered for construction by George Washington to protect America's growing maritime interests. The ships greatest glory came during the war of 1812 when she defeated four British frigates which earned her the nickname "Old Ironsides," because cannon balls glanced off her thick hull. The ship was restored in 1927 with contributions from the nation's school children.

The Charlestown Navy Yard was built on what was once Mouton's or Morton's Point, the landing place of the British army prior to the Battle of Bunker Hill. It was one of the first shipyards built in the United States. During its 174 year history, hundreds of ships were built, repaired and modernized, including the World War II destroyer USS Cassin Young. Today, thirty acres of the Navy Yard are preserved by the National Park Service as part of Boston National Historical Park. 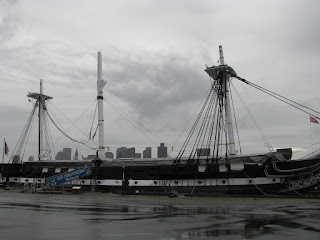 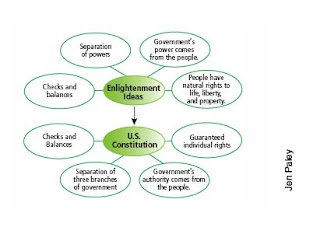 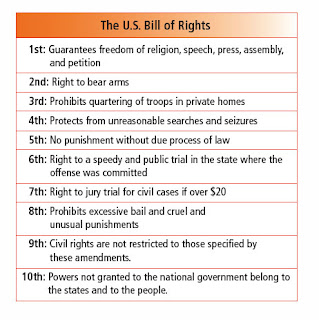 Poverty, social divisions, and economic crisis led to the French Revolution and a reign of terror. Napoleon Bonaparte took power in a coup d'etat and tried to overthrow Europe's old order. After his costly military campaigns, he was defeated at Waterloo, Belgium, and exiled.

Poverty and deep social divisions were the backdrop of the French Revolution. On the eve of the revolution, financial crisis gripped the government of Louis XVI. Rather than accept higher taxes, the commoners in France's legislative body, the Estates-General, broke off to form a National Assembly. Anticipating an attack by the king's forces, commoners then stormed the Bastille prison, marking the start of the Revolution. The new Assembly took control of the Catholic Church and adopted the Declaration of the Rights of Man and the Citizen. The document was inspired in part by the American Declaration of Independence and Constitution. The Assembly then wrote a constitution establishing a limited monarchy and a Legislative Assembly. France was soon at war with Austria, where some feared the revolution might spread. Louis XVI was taken captive by the Paris Commune. The Commune called for a National Convention and forced the revolution into a more violent phase. 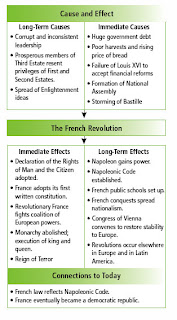 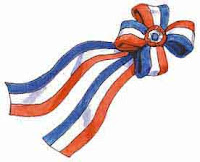 Poverty and deep social divisions were the backdrop of the French Revolution. On the eve of the revolution, financial crisis gripped the government of Louis XVI. Rather than accept higher taxes, the commoners in France's legislative body, the Estates-General, broke off to form a National Assembly. Anticipating an attack by the king's forces, commoners then stormed the Bastille prison, marking the start of the Revolution. The new Assembly took control of the Catholic Church and adopted the Declaration of the Rights of Man and the Citizen. The document was inspired in part by the American Declaration of Independence and Constitution. The Assembly then wrote a constitution establishing a limited monarchy and a Legislative Assembly. France was soon at war with Austria, where some feared the revolution might spread. Louis XVI was taken captive by the Paris Commune. The Commune called for a National Convention and forced the revolution into a more violent phase.

During the first years of the revolution, a republic was established, Louis XVI was executed, and thousands of people were killed on suspicion of opposing the revolution. While factions fought over control within France, European states fearing the spread of revolution made plans to invade France. The National Convention responded by forming a Committee of Public Safety. The committee led a 12-month Reign of Terror, executing close to 40,000 suspected enemies and expunging signs of Catholic influence. The committee also raised the largest army in European history and repelled the invading armies. With the crisis past, the National Convention ended the Reign of Terror and executed its zealous leader, Maximilien Robespierre. Power shifted into the hands of more moderate middle-class leaders who produced a constitution in 1795. The constitution called for a two-house legislative body and an executive committee, called the Directory. The Directory faced mounting problems. In 1799 a popular General, Napoleon Bonaparte, seized power in a coup d'état.

Section 3 The Age of Napoleon

Napoleon formed a new government, the consulate, in which he held absolute power. In 1802 he was crowned emperor and signed a peace treaty with Russia, Great Britain, and Austria. At home, he made peace with the Catholic Church and created a functioning bureaucracy. His Napoleonic Code preserved many of the rights gained in the revolution. War was soon renewed. By 1807, Napoleon had created a French empire. In parts of the empire, Napoleon sought to spread the revolution. However, his invasions had contributed to the spread of nationalism as well. This, along with British sea power, would spell his defeat. After a disastrous invasion of Russia, other European nations attacked Napoleon's army and captured Paris. Napoleon was exiled from France, and the monarchy was restored. Napoleon returned to power briefly, only to face final military defeat against a combined Prussian and British force at Waterloo and to be exiled once again.

After surveying the Chapter, we begin in Section 1 The French Revolution Begins

We can consider the "Causes of the French Revolution."

To cover the entire French Revolution is a lofty task but to deal with the subject as best we can there is a good reference in the "Detailed Guide to the Revolution."

One of the most interesting characters of the period is "Marie Antoinette."

Or, alternatively, we can listen to "Liberty, Equality, and Fraternity: Exploring the French Revolution" in song.

If someone is studying French, perhaps they can translate the anthem of the republican Revolution:

The Marseillaise (War Song for the Army of the Rhine)

Refrain
One of the most arresting images of the Revolution, no pun intended, is the guillotine. 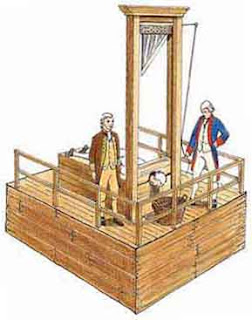 *Describe the social divisions of France’s old order.
*List reasons for France’s economic troubles in 1789.
*Explain why Louis XVI called the Estates-General and summarize what resulted.
*Understand why Parisians stormed the Bastille.

The Loss of Blood Begins (Audio)

On July 14, 1789, after a daylong hunting expedition, King Louis XVI returned to his palace in Versailles. Hours earlier, armed Parisians had attacked the Bastille. They had cut the chains of the prison drawbridge, crushing a member of the crowd, and poured into the courtyard. Chaos ensued as shots rang out, blood was spattered, and heads were paraded down the streets on spikes. When Louis heard the news, he exclaimed, “Then it’s a revolt?” “No, sire,” replied the duke bearing the news, “it’s a revolution!” The French Revolution had begun. Witness History relates the fall of the Bastille.


The Conquerors of the Bastille before the Hotel de Ville, painted by Paul Delaroche 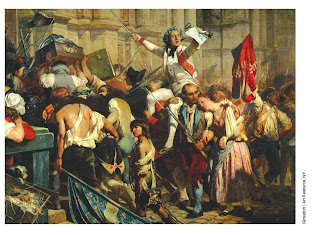 What were the causes and effects of the French Revolution, and how did the revolution lead to the Napoleonic era?

Background to the Revolution

Reading Check
Identifying
What groups were part of the Third Estate?

From Estates-General to National Assembly

Reading Check
Examining
Why did the Third Estate object to each estate's having one vote in the Estates-General?

The Destruction of the Old Regime

Declaration of the Rights of Man

A New Constitution and New Fears

Rise of the Paris Commune

Reading Check
Evaluating
What was the significance of the Constitution of 1791?

1. Using print and Internet sources (a reference to La Marseilloise is made above, an English translation is also available), familiarize yourself with the lyrics to The Marseillaise, God Save the Queen (not the pop version),

and The Star Spangled Banner. How do they vary in subject matter, tone, theme, and style, and how are they similar?

Not required, but if helpful, create a chart listing your findings.

Bibliographic resources for the French Revolution

Previous to or the buildup to the Revolution

Cf. The Coming of the French Revolution (Princeton Classic Editions)
by Georges Lefebvre.

The Fall of the French Monarchy 1787-1792 (The French Revolution)
by Michel Vovelle.

Great Fear of 1789
by Georges Lefebvre.

General works on the Revolution

The Crowd in the French Revolution (Galaxy Books)
by George Rude.

The Abolition Of Feudalism: Peasants, Lords, And Legislators In The French Revolution, by John Markoff.

Citizens: A Chronicle of the French Revolution
by Simon Schama.

The Sans-Culottes
by Albert Soboul.

The Vendee: A Sociological Analysis of the Counter-Revolution of 1793
by Charles Tilly.

Revolutionary Themes After the Revolution

Reflections on the Revolution in France (Oxford World's Classics)
by Edmund Burke.

Work and Revolution in France: The Language of Labor from the Old Regime…
by William H. Sewell Jr.


The Course in German History by A.J.P. Taylor.

Abuses inherited as a result of a controlling aristocracy may be seen clearly in this work.

Whigs and Hunters: The Origin of the Black Act by E.P. Thompson
Events That Changed the World

The Enlightenment and the American Revolution (1700–1800)

Results of the quiz.
1. Who were the physiocrats?

* CORRECT: French thinkers who focused on economics
EXPLANATION: The physiocrats claimed that their ideas about economic reforms were based on the natural laws of economics.

2. According to laissez-faire economist Adam Smith, a government should

* CORRECT: let free market forces drive the economy.
EXPLANATION: In The Wealth of Nations, Smith tried to show how manufacturing, trade, wages, profits, and economic growth were all linked to the market forces of supply and demand.

3. Physiocrats rejected mercantilism in favor of a policy of

4. How did Jean-Jacques Rousseau's beliefs differ from many Enlightenment thinkers?

5. Which phrase best describes the concept of natural law?

6. Which term describes the love of, or the search for, wisdom or knowledge?

* CORRECT: philosophy
EXPLANATION: Philosophy, is the love of, or the search for, wisdom or knowledge.

7. What event revolutionized thinking and led to the Enlightenment?

* CORRECT: the Scientific Revolution
EXPLANATION: The scientific discoveries of the 1500s and 1600s led Europeans to believe in the power of reason. Science was transforming how people looked at the world.

8. Who is the author of Leviathan?

* CORRECT: Voltaire
EXPLANATION: Voltaire, probably the most famous of the philosophes, used biting wit to expose the abuses of his day.

* CORRECT: Immanuel Kant
EXPLANATION: The German philosopher Immanuel Kant, author of Critique of Pure Reason, was one of the first to describe his times as "enlightened."


HW: email (or hard copy) me at gmsmith@shanahan.org.

Email only if you answer (i.e., you voluntarily choose to participate):


If you already did Wednesday's HW, you should just do Thursday's HW, otherwise, do both.

1. Thursday HW
p. 330, Graph Skills, #1
p. 331, Reading Skills, Identifying, What groups were part of the Third Estate?
p. 331, Picturing History, Would this market have been quieter or busier twenty years before the Revolution? Why?


Just a reminder: Quiz tomorrow: Chapter 10 Section 3 The Impact of the Enlightenment.


p. 332, History Through Art, What caused members to fear that the National Assembly would be dissolved through force?
p. 332, Reading Check, Examining, Why did the Third Estate object to each estate's having one vote in the Estates-General?