Prayer
Current Events (none today because of the Test):


Official unemployment rates in the United States hover around 10 percent, even though many experts believe the real numbers are much higher. But for young adults in America, the situation is even worse. 54 percent of Americans under the age of 25 are unemployed according to the labor department. It's taking many college graduates over a year to land a steady job, and many are in hundreds of thousands of dollars of debt.


The Chapter 21 Multiple Choice MAKE-UP Test, composed of 50 questions, will be Monday.


The Chapter 22 Multiple Choice Test, composed of 50 questions, is today. Be sure to put your name on both the Scantron and the Test. You may write on the Test. If you finish early you may take out non-Economic material.


After these Tests, more Test sample questions will be posted. I will post sample Test Questions from the remaining Chapters as well.


Finally, a short (20 Question, multiple choice), Diagnostic Test will be administered on Wednesday to determine which macroeconomic topics you need to review most.


I will hand out a packet from the most recent AP Economics Workshop Handbook 2008-2009 which includes sample questions and student answers which will help you review.


In the meantime, re-arrange yourselves into your three small groups and you can review sample Chapter multiple choice questions to answer. Decide within the groups how you want to sub-divide the questions and we can then review the suggested answers.


Email HW to gmsmith@shanahan.org
1. As review for HW, typical questions that you may encounter on the actual AP Economics Macro Test are included daily:

48. Julia would spend $30 per week even if she made no income. Her weekly income is $1,000 and her marginal propensity to consume is 0.5. How much does Julia save per week?

I. wages fluctuate quickly
II. Say's Law does not hold
III. input and output prices will stay in line with each other
IV. the government should not worry about maintaining aggregate demand at an adequate level

51. The real interest rate is

The investigation of the NYC attempted car bombing continues. Was Faisal Shahzad connected to the Taliban? Is Pakistan cooperating with the US? CBS News' Farhan Bokari has the latest from Islamabad.

Section 3 Revolutionary Chaos in China
Student protests erupted in Beijing on May 4, 1919, and later spread to cities across China. The protests set off a cultural and intellectual ferment known as the May Fourth Movement. Its goal was to strengthen China. Reformers sought to improve China’s position by rejecting Confucian traditions and learning from the West. As in Meiji Japan, they hoped to use their new knowledge to end foreign domination.

Women played a key role in the May Fourth Movement. They joined marches and campaigned to end a number of traditional practices, including footbinding. Their work helped open doors for women in education and the economy.

The Appeal of Marxism
Some Chinese turned to the revolutionary ideas of Marx and Lenin. The Soviet Union was more than willing to train Chinese students and military officers to become the vanguard, or elite leaders, of a communist revolution. By the 1920s, a small group of Chinese Communists had formed their own political party.

The Mausoleum of Dr. Sun Yat-sen is situated at the foot of the second peak of Mount Zijin (Purple Mountain) in Nanjing, China. Construction of the tomb started in January of 1926 and was finished in spring of 1929. The architect was Lu Yanzhi, who died shortly after it was finished.

In 1921, Sun Yixian and his Guomindang (gwoh meen dawng) or Nationalist party, established a government in south China. Sun planned to raise an army, defeat the warlords, and spread his government’s rule over all of China. When Western democracies refused to help, Sun accepted aid from the Soviet Union and joined forces with the small group of Chinese Communists. However, he still believed that China’s future should be based on his Three Principles of the People.

After Sun’s death in 1925, an energetic young army officer, Jiang Jieshi (jahng jeh shur), took over the Guomindang. Jiang Jieshi (also called Chiang Kai-Shek) was determined to smash the power of the warlords and reunite China, but he had little interest in either democracy or communism.

The death of Sun Yat Sen in March 1925 brought Chiang Kai Shek to prominence in China, and by 1928, after a series of bloody internal conflicts, Chiang Kai Shek became the effective dictator of China. Chiang's position was never completely secure. Throughout the war he was forced to divert large amounts of American aid to bolstering his power base and fighting the communists. The end of the War brought a resumption of the internal conflicts in China, and by 1950 Chiang and his supporters had been driven from the Chinese mainland onto the island of Formosa.

Jiang Jieshi headed the Guomindang (Nationalist) government in China from the late 1920s until 1949.

In mid-campaign, Jiang seized the chance to strike at the Chinese Communist Party, which he saw as a threat to his power. The Communists were winning converts among the proletariat in cities like Shanghai. Early in 1927, on orders from Jiang, Guomindang troops slaughtered Communist Party members and the workers who supported them. In Shanghai and elsewhere, thousands of people were killed. This massacre marked the beginning of a bitter civil war between the Communists and the Guomindang that lasted for 22 years.

Who Should Lead the New China?
The excerpts below present the views of China’s two most influential leaders on who should direct the future of China.


Who does each person think should lead China?

One Strong Leader
The most important point of fascism is absolute trust in a sagely able leader. Aside from complete trust in one person, there is no other leader or ism. Therefore, with the organization, although there are cadre, council members, and executives, there is no conflict among them, there is only the trust in the one leader. The leader has final decision in all matters.

Peasant Masses
The broad peasant masses have risen to fulfill their historic mission . . . the democratic forces in the rural areas have risen to overthrow the rural feudal power. . . . To overthrow this feudal power is the real objective of the national revolution. What Dr. Sun Yat-sen [Yixian] wanted to do . . . but failed to accomplish, the peasants have accomplished in a few months.

Mao Zedong and the Communists
Among the Communists who escaped Jiang’s attack was a young revolutionary of peasant origins, Mao Zedong (mow dzuh doong) (also called Mao Tse-tung). Unlike earlier Chinese Communists, Mao believed that the Communists should seek support not among the small urban working class but among the large peasant masses.

Although the Communists were pursued at every turn by Guomindang forces, Mao was optimistic about eventual success. In southeastern China, Mao and the Communists redistributed land to peasants and promised other reforms.

Mao Zedong led the Chinese Communists through some of their darkest times, including the Long March.

How did Chiang Kai-shek change the Communist-Nationalist alliance?

The Communists in Hiding

Which group did Mao believe would start the Communist Revolution in China? 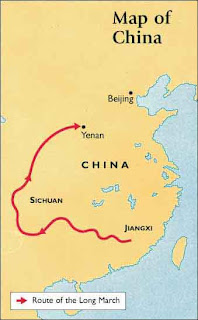 Jiang Jieshi, however, was determined to destroy the “Red bandits,” as he called the Communists. He led the Guomindang in a series of “extermination campaigns” against them. The Guomindang harassed Mao’s retreating army throughout the Long March from 1934 to 1935. Mao’s forces used guerrilla, or irregular hit-and-run, tactics to fight back. At the end of the Long March, the Communists set up a new base in a remote region of northern China. There, Mao rebuilt his forces and plotted new strategies for fighting the Guomindang.

In October 1934, facing complete annihilation by the Guomindang led by Generalissimo Chiang Kai-shek, the Communist Red Army abandoned their bases across south and central China. The search for new Red Army bases began one of the largest mobilisation of ground troops in military history and modern history's most dramatic retreat, the Long March of 1934 -1937.

The three armies each journeyed across 11 provinces to regroup in Yan'an in Shaanxi Province. Their fortunes turned, and eventually, the Communist Peoples' Republic of China was founded in 1949.

Zhang Guotao's Fourth Front Army was outnumbered and outflanked at the Yellow River by the army of the Muslim Warlord of Qinghai Province, Ma Bufang.

Only three divisions made it across to become the The Western Route Army which included the 1,300-strong Women's Independent Regiment. The women had started out from Cangxi in Sichuan Province as as teenagers. By Gansu, they had already covered more than 10,000 km on foot.

Ambushed at Liyuankou Pass, most of these women were slaughtered by Ma Bufang's horseback troops. A handful escaped but the majority were killed, captured, raped, tortured or forcefully taken as wives by their captors. The surviving women Long March veterans are all in their 80's and 90's today.

The Western Route Army was progressively decimated to complete annihilation along the Gansu Corridor, part of the ancient Silk Route. This tragedy became the worst ever military failure of the Chinese Red Army. The survivors of the Western Route Army numbered only 430 out of a total of 21,800 soldiers who initially crossed the Yellow River. They were found wandering in the Gobi Desert near Xingxingxia in Xinjiang Province. None of those survivors were female.

Tragically, the story of the ill-fated Western Route Army is never considered part of The Long March. The sacrifice of over 20,000 brave troops here has been eclipsed by the betrayal of their leader, Zhang Guotao, who defected to the Nationalist Guomindang after his fall from grace.

During the march, the Communists enforced strict discipline. Soldiers were told to treat peasants politely, pay for goods they wanted, and avoid damaging crops. Such behavior made Mao’s forces welcome among peasants, many of whom had suffered greatly at the hands of the Guomindang.

Primary Source
One of the most dramatic events in the conflict between the Guomindang and the Communists was the epic retreat known as the Long March. During the Long March, Mao and about 100,000 of his followers fled the Guomindang. In the next year, they trekked more than 6,000 miles, facing daily attacks as they crossed rugged mountains and mighty rivers. Only about 8,000 marchers survived the ordeal. For decades, the Long March stood as a symbol of communist heroism and inspired new recruits to follow Mao. He claimed the great retreat as a victory. As he observed:

Primary Source
“The Long March is also a seeding-machine. It has sown many seeds in eleven provinces, which will sprout, grow leaves, blossom into flowers, bear fruit, and yield a crop.”

—Mao Zedong, “On the Tactics of Fighting Japanese Imperialism”

Why did it seem that communism was no longer a threat to China after the Long March?

The New China of Chiang Kai-shek

What was the intended final stage of Chiang Kai-shek's reform program?

Watch a video clip of Mao's rise to power

Chinese posters from the Cultural Revolution

A brief biography of Mao

The emergence of the People's Republic of China

How To Take Effective Notes
Email to gmsmith@shanahan.org