Henry Kissinger, former U.S. Secretary of State (under Nixon), describes the American economy and the "New World Order" of Obama.

The advance towards the New World Order seems to be progressing with the important announcement yesterday that Arab states have launched secret moves with China, Russia, and France to stop using the US currency for oil trading.

The article goes on to state that Chinese financial sources believe Obama is preoccupied with other matters.

Obama lobbied in Copenhagen for his hometown as an Olympics host city, an effort that came to nought as the U.S. was eliminated in the first round.

In the past month, the president has found the time to play golf - four times. He's had links legend Arnold Palmer and other top golfers over to the White House. He's shot some hoops with friends and yukked it up with hockey's Pittsburgh Penguins.

He's celebrated [Islamic] Ramadan at the White House, eulogized newsman Walter Cronkite in New York City, attended several fundraisers (including Thursday afternoon's luncheon), appeared on David Letterman's late-night show (one of eight interviews), delivered two speeches to AFL-CIO rallies and dropped by the Washington Monument and the Jefferson Memorial for a visit with his wife and daughters.


And the brief jaunt to Copenhagen was Obama's seventh trip out of town since Sept. 1. No word or "decision on strategy for the war in Afghanistan" where eight American soldiers [died] in the biggest loss of U.S. life in a single battle since 2001.


While reports from Afghanistan are one thing an outing that the Times article missed was the Obama's night out on the town for their anniversary. 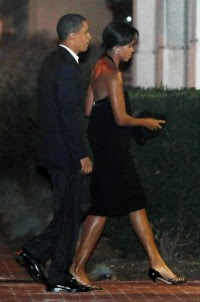 We are addressing Chapter 2 in particular for the parts not covered in the Quiz. We will cover the non-Quiz material in Chapter 2 for a Test on Chapter 2.

We will finish "NAFTA: Are Jobs Being Sucked Out of the United States?"


For the "Process," we are considering "Frontier Specialists."

In Activity 1 we pretended that the year is 1840. We have two families living in proximity to each other.

In small groups (and the Super Group), we drew a chart which represents current production.

We continue the lesson with new material.

The families meet to exchange information. Members from both families want to see if they would be better off if each family specialized in what it did best and exchanged the extra goods they produced for other items they need.

In your small group, draw a chart which represents what they found.

1. In which case does each family have an absolute advantage?

2. Would the families be better off if each family produced only one item and traded with the others? Explain.

3. What will happen if one of the families does not produce all it can?

The Jacobson's have moved, and a new family, the Martins, now live near the Sanchez farm. The two families are interested in trading cloth and meat. The following is the new production schedule:

Now, you need three columns: Family, Cloth, and Meat; and, you should have three rows: Sanchez, Martin, and TOTAL.

One family has a comparative advantage here if it can produce a product at a lower opportunity cost than the other family. Comparative advantage is a primary basis for specialization and trade. To see if both families will benefit, we must see what each family would give up--the "cost" of one item in terms of the other item. The "cost" of one item in terms of the other is found by calculating the ratio between the two items. The ratio of meat to cloth for Sanchez is 2:1; for Martin 1.5:1. In other words, for the Sanchez family to produce one additional unit of meat, they must give up some cloth.

1. Which family has the absolute advantage in producing cloth? Meat?

2. Can the Sanchez family still benefit from trading?

3. How much cloth would the Sanchez family give up to produce one additional unit of meat? The Martins?

4. Which family has a comparative advantage in meat (has to give up the least cloth)?

5. How much meat would the Sanchez family give up to produce one additional unit of cloth? The Martins?

6. Which family has the comparative advantage in cloth?

7. Should the two families specialize and trade (Cf. the summary below)?

The debate on NAFTA, and United States foreign trade in general, usually centers on the potential negative effects of imports on the economy. It is relatively easy to identify who is harmed, because imports displace workers in industries where the comparative advantage lies elsewhere. At the same time, others benefit. Firms whose exports increase clearly benefit. Consumers get the same or higher quality products at lower costs. Are these gains costless? No; some firms lose sales and some individuals lose their jobs. Is protecting firms or industries that are likely to lose costless? No; we lose the gains from trade, and those who would have benefited because they could have increased exports never get the chance to do so.

The purpose of this lesson is to acquaint students with the concept of comparative advantage (relative efficiency) and the arguments for and against foreign trade. Understanding the theory, the debates surrounding the theory, and the relevant data will help students to think clearly about optimum public policy concerning free trade.

Cf. Absolute Advantage: "NAFTA: Are Jobs Being Sucked Out of the United States?"

2. Read "When Disaster Strikes, What Can We Do?"

Answer the following questions: what non-government institutions traditionally succeeded "in transforming the desire to do good into real world benefits?" What did Americans form as opposed to the Europeans?

3. Can you provide examples of giving non-government institutions inferred from your reading of the article?

“Americans of all ages, all conditions, and all dispositions constantly form associations. They have not only commercial and manufacturing companies . . . but associations of a thousand other kinds, religious, moral, serious, futile, general or restricted, enormous or diminutive. The Americans make associations to give entertainments, to found seminaries, to build inns, to construct churches, to diffuse books, to send missionaries to the antipodes; in this manner, they found hospitals, prisons, and schools . . . .” (de Tocqueville).


There is an additional but lengthy hint: the first blog post--AP Economics: Comparative Advantage-- indicates a substantial answer (in both French and English) to this question by the French philosopher Tocqueville.