State-owned Chinese energy giant CNOOC is buying a multibillion-dollar stake in 600,000 acres of South Texas oil and gas fields, potentially testing the political waters for further expansion into U.S. energy reserves. The company is said to increase its rig count in South Texas from 10 rigs to about 40 by the end of 2012.

Energy consumption in the world’s most populous nation has doubled in less than a decade, and the International Energy Agency reported in July that China surpassed the U.S. in total energy used in 2009.

China has poured some $20 billion in loans and direct investments into Brazil’s offshore oil exploration and production, for example. And last spring, the Chinese government loaned $20 billion to Venezuela to develop oil fields in its Orinoco River basin, with much of the work awarded to Chinese companies.

All this comes on the heels of an Obama-appointed 7 October panel statement which concluded that the Obama administration was slow to ramp up its response to the Gulf of Mexico oil spill, then overreacted as public criticism turned the disaster into a political liability. The staff of a special commission investigating the disaster stated their conclusions in four papers issued by the National Commission on the BP Deepwater Horizon Oil Spill and Offshore Drilling. 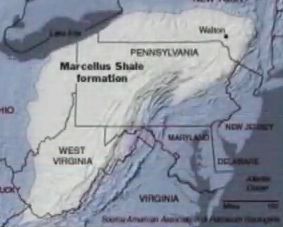 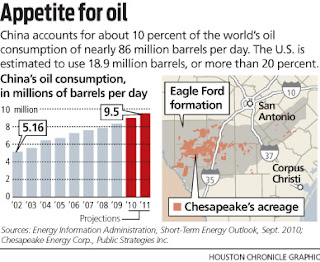 Economic systems help societies provide for the wants and needs of their people. Three major economic systems have evolved over the years: traditional, command, and market economies. In the traditional economy, the WHAT, HOW, and FOR WHOM questions are answered by tradition, customs, and even habits handed down from generation to generation. In a command economy, a central authority answers the three basic questions. In a market economy, decision making is decentralized with consumers and entrepreneurs playing a central role. Most economies in the world today feature some mix of traditional, command, and market economies.


May 2009 cover of the American magazine, Newsweek:

BULGARIA - From a Command to a Market Economy, 4:43 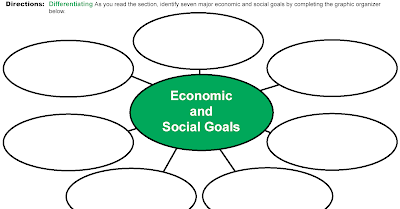 Companies in the News

Economists normally measure growth as the annual percentage change in either real GDP or real per capita GDP. (The latter measure is a better measure of how growth affects a typical individual in the economy.) While a small difference in growth rates will have a small effect on output in a given year, the cumulative effects of differences in growth rates is rather dramatic as a result of compound growth. This result can be seen quite easily by examining the rule of 72.

The rule of 72 states that:

Suppose, for simplicity that an individual lives for 72 years. If he or she resides in an economy in which per capita real GDP grows by 2% per year, output will double in approxmately 36 (=72/2) years. This means that per capita output at the time of a typical person's death will be approximately 4 times as large as it was at that person's birth. If the economy grows at an annual rate of 4%, however, output will double in 18 years. In this case, per capita output will double by the time this person turns 18, double again by age 36, again by age 54, and again by the time this typical person dies at age 72. This means that output will be 16 times as large at the time of a typical person's death as it would be if per capita output grew at an annual rate of 2%. The difference becomes even more pronounced over longer time periods. In the long run, the most important determinant of the standard of living for a typical person is the rate of economic growth. For this reason, economists devote a great deal of effort to an analysis of the factors that influence economic growth.

Problems with using economic growth as a measure of economic welfare

There are, of course, a number of problems with using real GDP growth as a measure of social welfare. Among the problems are:
Kramer makes George realize what a miserable person he is: he has a meaningless quality of life: 52.
Cf.
http://www.youtube.com/watch?v=QurYZ6Bsjqs&feature=related
Can GDP Buy You Happiness? About 35 years ago, the king of Bhutan decided that the well-being of his country was not best measured by its GDP, but rather by something he called its “Gross National Happiness.” A very useful source is the article by Andrew C. Revkin in The New York Times (October 4, 2005) titled “A New Measure of Well-Being from a Happy Little Kingdom,” available on the Web at: "A New Measure of Well-Being From a Happy Little Kingdom. Cf. http://www.nytimes.com/2005/10/ 04/science/04happ.html?ei=5088&en=a4c0250cf8730dca&ex= 1286078400&partner=rssnyt&emc=rss&pagewanted=all

Economic growth is affected by:
Less developed economies generally have relatively high rates of fertility (and mortality). This results in a relatively large growth in the quantity of labor available in such economies. Industrialized economies, on the other hand, tend to experience relatively low rates of growth in the labor force (since birth rates are lower in countries at higher levels of economic development). The quality of the labor force may be enhanced by investments in human capital (through investments in health care, education, and training programs).
Developing economies tend to lag behind industrialized economies in access to capital and in technological development. Foreign direct investment and international aid programs that provide technological assistance, though, help to provide a technology transfer from industrialized to developing nations.

The rate of economic growth can be expressed as: 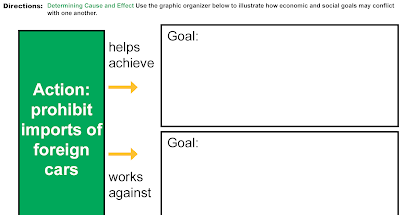 The action helps achieve the goals of economic security or full employment while working against the goal of economic efficiency.


Reading Check
Explaining
Why do trade-offs among goals exist?
Section 3 American Free Enterprise
Free enterprise, another term used to describe the American economy, refers to the competition that is allowed to flourish with a minimum of government interference. A capitalistic free enterprise economy has five important characteristics: economic freedom, voluntary exchange, private property rights, the profit motive, and competition. Another key component is the entrepreneur, who is the risk-taking individual in the economy that starts new businesses and undertakes new ways of doing things in search of profits. The consumer is sometimes thought of as being "king" or sovereign of the market, and government is involved in the economy primarily because people want it to be involved. Because of the government involvement as the protector, provider, regulator, and consumer, the American economy can also be described as a mixed economy, or a modified free enterprise economy.


Hayek's 'The Road to Serfdom' in Five Minutes, 5:01
What do all forms of collectivism (command economy) lead to?
Are there differences--in terms of control exercised--between Nazism or Communism?
How is order achieved in these systems?
Can democracies be on the road to serfdom?
In the 1940s, Look Magazine made a comic strip of Hayek's classic book 'The Road to Serfdom'. Hayek went on to win the Nobel Prize in Economics in 1974.
Cf. http://en.wikipedia.org/wiki/The_Road...
Hayek's central thesis is that all forms of collectivism lead logically and inevitably to tyranny, and he used the Soviet Union and Nazi Germany as examples of countries which had gone down "the road to serfdom" and reached tyranny. Hayek argued that within a centrally planned economic system, the distribution and allocation of all resources and goods would devolve onto a small group, which would be incapable of processing all the information pertinent to the appropriate distribution of the resources and goods at the central planners' disposal. Disagreement about the practical implementation of any economic plan combined with the inadequacy of the central planners' resource management would invariably necessitate coercion in order for anything to be achieved. Hayek further argued that the failure of central planning would be perceived by the public as an absence of sufficient power by the state to implement an otherwise good idea. Such a perception would lead the public to vote more power to the state, and would assist the rise to power of a "strong man" perceived to be capable of "getting the job done". After these developments Hayek argued that a country would be ineluctably driven into outright totalitarianism. For Hayek "the road to serfdom" inadvertently set upon by central planning, with its dismantling of the free market system, ends in the destruction of all individual economic and personal freedom. Hayek argued that countries such as the Soviet Union and Nazi Germany had already gone down the "road to serfdom", and that various democratic nations are being led down the same road. In The Road to Serfdom he wrote: "The principle that the end justifies the means is in individualist ethics regarded as the denial of all morals. In collectivist ethics it becomes necessarily the supreme rule."
Cf. http://www.youtube.com/watch?v=mkz9AQhQFNY
Activity: Interdisciplinary Connection
Read 19th-century short stories by Russian authors such as Anton Chekhov or Nikolay Gogal. As you read, list details that describe effects of the Soviet Union's command economy--for example, details about jobs, economic and social status, property rights, individual freedoms, and the government. Write a report summarizing the economic effects that you fin din the story.
MARKET AND COMMAND SYSTEMS, 12:44
Cf. http://learnecon.info/moodle/mod/resource/view.php?id=10
BULGARIA - From a Command to a Market Economy, 4:43
Cf. http://learnecon.info/moodle/mod/resource/view.php?id=11
1.1 Quiz
Cf. http://learnecon.info/moodle/mod/quiz/attempt.php?id=137
IBM Corp. has launched CityOne, an online interactive simulation game designed to enable local government officials find innovative solutions for energy, water, traffic, banking and retail problems in their communities.
Players can explore more than 100 simulated crisis scenarios in CityOne. The solutions must balance various financial, environmental, social and budgetary goals. The solutions include technologies such as business process management, service reuse, cloud computing and collaborative technologies.
Cf. http://www-01.ibm.com/software/solutions/soa/innov8/cityone/index.jsp

HW email to gmsmith@shanahan.org or hand in hard copy.

1. Study for Test #1, Chapter 1: more details are forthcoming (in-class and on the wiki). The Test will be on Wednesday, 20 October.