In the light of tragedy: electronic messaging systems are essential tools of public safety

Mobile Campus Incorporated markets an advertiser-supported campus text-messaging system that is otherwise free to affiliated universities. This is a free service capable of immediately and simultaneously alerting students, university employees, and others via text messages on cell phones.

Netpresenter Incorporated is a XML-based screen-saver and pop-up notification service.

ClearTXT is a mobile messaging provider to keep students and faculty informed during emergencies.

Just in case, resources for a Uniform Disaster Plan, Lock Down Procedure 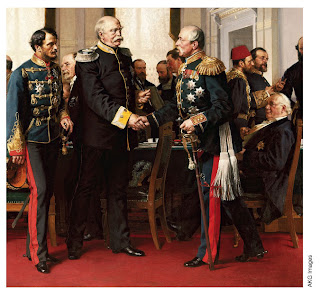 Analyze the basic political organization of the new German empire.

Terms, etc.
Otto von Bismarck - came from Prussia’s Junker class, made up of conservative landowning nobles. Bismarck first served Prussia as a diplomat in Russia and France. In 1862, King William I made him prime minister. Within a decade, the new prime minister had become chancellor, or the highest official of a monarch, and had used his policy of “blood and iron” to unite the German states under Prussian rule. p. 694

chancellor- the highest official of a monarch; prime minister p.694

Realpolitik- realistic politics based on the needs of the state p. 694

annex- add a territory to an existing state or country p. 694

In the early 1800s, people living in German-speaking states had local loyalties. By the mid-1800s, however, they were developing a national identity.

Why do you think Austrian influence was greater among the southern German states than among the northern ones? p. 694

What was the German Confederation? p. 693

What techniques did Bismarck use to unify the German states? p. 694

How was the new German government, drafted by Bismarck, structured? p. 695

Explain why Bismarck was called the Iron Chancellor.
*

Terms, etc.
Kulturkampf- a name, given to a struggle between the the Roman Catholic Church and the German government, chiefly over the latter's efforts to control educational and ecclesiastical appointments in the interest of the political policy of centralization. p. 698

William II- the second son of William the Conqueror who succeeded him as King of England; The new emperor was supremely confident in his abilities and wished to put his own stamp on Germany. In 1890, he shocked Europe by asking the dominating Bismarck to resign. “There is only one master in the Reich,” he said, “and that is I.” p. 699

What factors did Germany possess that made industrialization possible there? p. 697

Why did Bismarck try to crush the Catholic Church and the Socialists? p. 698

1. How does this cartoon reflect the relationship between Bismarck and the Catholic Church? p. 698

2. How did the conflict between church and state affect German politics in the 1870s? p. 698

Biography
Otto von Bismarck
Otto von Bismarck (1815–1898) spent his early years on his father’s country estate. He worked briefly as a civil servant, but found the work boring. At 24, Bismarck resigned his post as a bureaucrat. “My ambition strives more to command than to obey,” the independent-minded young man explained.

The resignation did not end his career in government. While he was a delegate to a United Diet that was called by Prussian King Frederick William IV, Bismarck’s conservative views and passionate speeches in defense of government policies won him the support of the king. He then served as a diplomat to the German Federation. He became chancellor of the German empire in 1871, a position he held for 19 years. What path did Bismarck take to win political power? p. 698

Understand what roles Count Camillo Cavour and Giuseppe Garibaldi played in the struggle for Italy.
*

Describe the challenges that faced the new nation of Italy.

Terms, etc.
Camillo Cavour-was a leading figure in the movement toward Italian unification. He was Prime Minister of the Kingdom of Piedmont-Sardinia, and ruled it throughout the Second Italian War of Independence and Garibaldi's campaigns to unite Italy (besides a small six-month resignation from the post). Cavour died only three months after the declaration of a united Kingdom of Italy, and thus did not live to see Venetia or Rome included in the kingdom. p. 702

Giuseppe Garibaldi- Italian patriot whose conquest of Sicily and Naples led to the formation of the Italian state p. 702

anarchist- someone who wants to abolish all government p. 703

emigration- migration from a place; movement away from their homeland p. 703

What problems did Italians experience after unification? p. 703

Describe how nationalism contributed to the decline of the Hapsburg empire.
*

Understand how the growth of nationalism affected the Ottoman empire.

Francis Joseph- inherited the Hapsburg throne. He would rule until 1916, presiding over the empire during its fading days into World War I. p. 706

What actions did Francis Joseph take to maintain power? p. 706

How did Hungarians and Slavic groups respond to the Dual Monarchy? p. 707

How did the European powers divide up Ottoman lands? p. 708

Map Skills
In the late 1800s, the Balkans had become a center of conflict, as various peoples and empires competed for power.

3. Identify Central Issues
Why do you think competing interests in the Balkans led the region to be called a powder keg? p. 707

Thinking Critically
1. (a) Is nationalism a positive force? Explain your answer. (b) What event or events in recent years brought out nationalistic feelings among Americans? Why? p. 709

2. Connections to Today
Do library research to identify an example of nationalism today. p. 709

Explain why tsars followed a cycle of absolutism, reform, and reaction.
*

Understand why the problems of industrialization contributed to the outbreak of revolution.

Terms, etc.
colossus- giant p. 711
Alexander II- came to the throne in 1855 during the Crimean War. His reign represents the pattern of reform and repression used by his father and grandfather, Alexander I and Nicholas I. The Crimean War had broken out after Russia tried to seize Ottoman lands along the Danube River. Britain and France stepped in to help the Ottoman Turks, invading the Crimean peninsula that juts into the Black Sea. The war, which ended in a Russian defeat, revealed the country’s backwardness. Russia had only a few miles of railroads, and the military bureaucracy was hopelessly inefficient. Many felt that dramatic changes were needed pg. 712
Crimean War- war fought mainly on the Crimean Peninsula between the Russians and the British, French, and Turks from 1853–1856 p. 712
emancipation- granting of freedom to serfs or slaves p. 712
zemstvo- local elected assembly set up in Russia under Alexander II p. 712
pogrom- violent attack on a Jewish community p. 712
refugees- a person who flees from home or country to seek refuge elsewhere, often because of political upheaval or famine p. 712
Duma- elected national legislature in Russia p. 714
Peter Stolypin-Stolypin soon realized that Russia needed reform, not just repression. To regain peasant support, he introduced moderate land reforms. He strengthened the zemstvos and improved education. Unfortunately, these reforms were too limited to meet the broad needs of most Russians, and dissatisfaction still simmered. Stolypin was assassinated in 1911. Several more Dumas met during this period, but new voting laws made sure they were conservative. By 1914, Russia was still an autocracy, but one simmering with unrest.
p. 714

Checkpoint
Describe the social structure that existed in Russia during the 1800s. p. 711
How did Alexander III respond to the murder of his father? p. 712
How did Russia industrialize? p. 713
Why was Bloody Sunday a turning point for the Russians? p. 714