Keynesian Economics According to the Center for Freedom and Prosperity

We are addressing Chapter 2 in particular for the parts not covered in the Quiz. We will cover the non-Quiz material in Chapter 2 for a Test on Chapter 2.

Cf. Absolute Advantage: "NAFTA: Are Jobs Being Sucked Out of the United States?"

HW should be sent to gmsmith@shanahan.org

1. What did Ricardo's theory of comparative advantage suggest?

2. Use the web AmosWEB (http://www.amosweb.com/cgi-bin/awb_nav.pl) to define the following terms for HW:

We can review the results of the Quiz; I should have my GradeConnect set up soon where grades will be posted.

Rococo art was an important element of French culture during the ancien regime. The style is highly suggestive of the attitudes and atmosphere in the royal court during the period leading up to the French Revolution. In this activity you will read about four rococo painters and how they experienced the shift from rococo to neoclassicism, and from the ancien regime to the era of the French Revolution.

You can continue to use the "Ancien Regime Rococo" site as a reference.

In particular, consider Fragonard's, "The Good Mother" can be contrasted with an earlier related painting, Rembrandt's, "Holy Family."

Rembrandt's, "Holy Family," is an excellent portrayal of an earlier time. 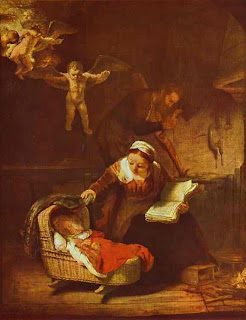 After considering the link, "Ancien Regime Rococo," we can pick up the lesson from the previous material.

Furniture and tapestries featured delicate shells and flowers, and more pastel colors were used. Portrait painters showed noble subjects in charming rural settings, surrounded by happy servants and pets. Although this style was criticized by the philosophes for its superficiality, it had a vast audience in the upper class and with the growing middle class as well.

The new Enlightenment ideals led composers and musicians to develop new forms of music. There was a transition in music, as well as art, from the baroque style to rococo. An elegant style of music known as “classical” followed. Ballets and opera—plays set to music—were performed at royal courts, and opera houses sprang up from Italy to England. Before this era, only the social elite could afford to commission musicians to play for them. In the early to mid-1700s, however, the growing middle class could afford to pay for concerts to be performed publicly.

Among the towering musical figures of the era was Johann Sebastian Bach. A devout German Lutheran, Bach wrote beautiful religious works for organ and choirs. He also wrote sonatas for violin and harpsichord. Another German-born composer, George Frideric Handel, spent much of his life in England. There, he wrote Water Music and other pieces for King George I, as well as more than 30 operas. His most celebrated work, the Messiah, combines instruments and voices and is often performed at Christmas and Easter.

was one of the most important figures in the development of classical music. He helped develop forms for the string quartet and the symphony. Haydn had a close friendship with another famous composer, Wolfgang Amadeus Mozart.

Mozart was a child prodigy who gained instant celebrity status as a composer and performer. His brilliant operas, graceful symphonies, and moving religious music helped define the new style of composition. Although he died in poverty at age 35, he produced an enormous amount of music during his lifetime. Mozart’s musical legacy thrives today.

By the 1700s, literature developed new forms and a wider audience. Middle-class readers, for example, liked stories about their own times told in straightforward prose. One result was an outpouring of novels, or long works of prose fiction. English novelists wrote many popular stories. Daniel Defoe wrote Robinson Crusoe, an exciting tale about a sailor shipwrecked on a tropical island. This novel is still well known today. In a novel called Pamela, Samuel Richardson used a series of letters to tell a story about a servant girl. This technique was adopted by other authors of the period.

How did the arts and literature change as Enlightenment ideas spread?

The courts of Europe became enlivened as philosophes tried to persuade rulers to adopt their ideas. The philosophes hoped to convince the ruling classes that reform was necessary. Some monarchs did accept Enlightenment ideas. Others still practiced absolutism, a political doctrine in which a monarch had seemingly unlimited power. Those that did accept these new ideas became enlightened despots, or absolute rulers who used their power to bring about political and social change.

Enlightened Rulers in the Eighteenth Century

Go online to, PHSchool.com, for an audio guided tour and related questions. The text in the audio is on the page as well. Enter web Code: nap-1721, in each of the two boxes listed there.

To use a Web Code:

There are three questions there, listed below:

Frederick II, known as Frederick the Great, exerted extremely tight control over his subjects during his reign as king of Prussia from 1740 to 1786. Still, he saw himself as the “first servant of the state,” with a duty to work for the common good.

Frederick openly praised Voltaire’s work and invited several of the French intellectuals of the age to Prussia. Some of his first acts as king were to reduce the use of torture and allow a free press. Most of Frederick’s reforms were directed at making the Prussian government more efficient.

To do this, he reorganized the government’s civil service and simplified laws. Frederick also tolerated religious differences, welcoming victims of religious persecution.

“In my kingdom,” he said, “everyone can go to heaven in his own fashion.” His religious tolerance and also his disdain for torture showed Frederick’s genuine belief in enlightened reform. In the end, however, Frederick desired a stronger monarchy and more power for himself.

Catherine II, or Catherine the Great, empress of Russia, read the works of the philosophes and exchanged letters with Voltaire and Diderot. She praised Voltaire as someone who had “fought the united enemies of humankind: superstition, fanaticism, ignorance, trickery.” Catherine believed in the Enlightenment ideas of equality and liberty.

Catherine, who became empress in 1762, toyed with implementing Enlightenment ideas. Early in her reign, she made some limited reforms in law and government. Catherine abolished torture and established religious tolerance in her lands. She granted nobles a charter of rights and criticized the institution of serfdom. Still, like Frederick in Prussia, Catherine did not intend to give up power. In the end, her main political contribution to Russia proved to be an expanded empire.

In Austria, Hapsburg empress Maria Theresa ruled as an absolute monarch. Although she did not push for reforms, she is considered to be an enlightened despot by some historians because she worked to improve peasants’ way of life. The most radical of the enlightened despots was her son and successor, Joseph II. Joseph was an eager student of the Enlightenment, and he traveled in disguise among his subjects to learn of their problems.

Joseph continued the work of Maria Theresa, who had begun to modernize Austria’s government. Despite opposition, Joseph supported religious equality for Protestants and Jews in his Catholic empire. He ended censorship by allowing a free press and attempted to bring the Catholic Church under royal control. He sold the property of many monasteries that were not involved in education or care of the sick and used the proceeds to support those that were. Joseph even abolished serfdom. Like many of his other reforms, however, this measure was canceled after his death.

Why were the philosophes interested in sharing their beliefs with European rulers?

Lives of the Majority Change Slowly

Most Europeans were untouched by either courtly or middle-class culture. They remained what they had always been—peasants living in small rural villages. Echoes of serfdom still remained throughout Europe despite advances in Western Europe. Their culture, based on centuries-old traditions, changed slowly.

By the late 1700s, however, radical ideas about equality and social justice finally seeped into peasant villages. While some peasants eagerly sought to topple the old order, others resisted efforts to bring about change. In the 1800s, war and political upheaval, as well as changing economic conditions, would transform peasant life in Europe.

Important Composers included in this section: Bach, Handel, and Haydn, among others. Music is available on Songza.

Haydn, Deutschland Ueber Alles (3:35), and a bit of trivia about this composition. Do you know which 20th century German political group adopted this song to represent their movement and point of view? Traditional German music was transformed for political and propaganda purposes.

During this time, why did change occur slowly for most Europeans?

Post a detailed answer with specifics on our Shanawiki page.

Based on the material, "Rococo Reaction," answer the following:

Based on what you see in the collection of images here ("Rococo Reaction"), describe what you think it would have been like to live during this time period.

Why might the philosophes have disliked the rococo style?

Current Events (none today because of the assembly):

We are a short schedule for today but we will finish up other issues in Chapter Two with a PowerPoint presentation.

HW email to me, nothing written today at gmsmith@shanahan.org.

Read Chapter 2 in particular for the parts not covered in the Quiz. We will cover the non-Quiz material in Chapter 2.