As Rome’s political and social systems evolved at home, its armies expanded Roman power across Italy. Roman armies conquered first the Etruscans and then the Greek city-states in the south. By about 270 B.C., Rome controlled most of the Italian peninsula.

Citizen-Soldiers Make Up the Roman Army
Rome’s success was due to skillful diplomacy and to its loyal, well-trained army. The basic military unit was the legion, each of which included about 5,000 men. As in Greece, Roman armies consisted of citizen-soldiers who originally fought without being paid and had to supply their own weapons. Eventually, they received a small stipend, or payment, but their main compensation was always a share of the spoils of victory. Roman citizens often made good soldiers because they were brought up to value loyalty, courage, and respect for authority.

To ensure success, Roman commanders mixed rewards with harsh punishment. Young soldiers who showed courage in action won praise and gifts. If a unit fled from battle, however, one out of every ten men from the disgraced unit was put to death. 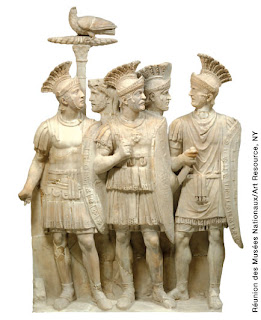 During the time of the late republic, praetorians (above), or bodyguards, began protecting army generals. Later, they would become an elite guard for Roman emperors.

Rome Is Just With Conquered Lands
Rome generally treated its defeated enemies with justice. Conquered peoples had to acknowledge Roman leadership, pay taxes, and supply soldiers for the Roman army. In return, Rome let them keep their own customs, money, and local government.

To a few privileged groups among the conquered people, Rome gave the highly prized right of full citizenship. Others became partial citizens, who were allowed to marry Romans and carry on trade in Rome. As a result of such generous policies, most conquered lands remained loyal to Rome even in troubled times.

Maintaining the State
To protect its conquests, Rome posted soldiers throughout the land. It also built a network of all-weather military roads to link distant territories to Rome. As trade and travel increased, local peoples incorporated Latin into their languages and adopted many Roman customs and beliefs. Slowly, Italy began to unite under Roman rule.

Checkpoint
How did the Romans treat the people they conquered?

The family was the basic unit of Roman society. Under Roman law, the male head of the household—usually the father—had absolute power in the family. He enforced strict discipline and demanded total respect for his authority. His wife was subject to his authority and was not allowed to administer her own affairs. The ideal Roman woman was loving, dutiful, dignified, and strong.

The Role of Women Changes Over Time
Roman women played a larger role in society than did Greek women. They could own property, and, in later Roman times, women from all classes ran a variety of businesses, from small shops to major shipyards. Those who made their fortunes earned respect by supporting the arts or paying for public festivals. However, most women worked at home, raising their families, spinning, and weaving.

Over the centuries, Roman women gained greater freedom and influence. Patrician women went to the public baths, dined out, and attended the theater or other forms of public entertainment with their husbands. Some women, such as Livia and Agrippina the Younger, had highly visible public roles and exercised significant political influence.

Romans Educate all Children
Both girls and boys from the upper and lower classes, all learned to read and write. By the later years of the republic, many wealthy Romans would hire private tutors, often Greeks, to supervise the education of their children. Under their guidance, children memorized major events and developments in Roman history. Rhetoric was an important subject for boys who wanted to pursue political careers.

Roman Religious Practices
The Romans believed in numerous gods and goddesses, many of whom they adapted from Greek religion. Like the Greek god Zeus, the Roman god Jupiter ruled over the sky and the other gods. His wife Juno, like the Greek goddess Hera, protected marriage. Romans also prayed to Neptune, god of the sea, whose powers were the same as those of the Greek god Poseidon. On the battlefield, they turned to Mars, the god of war.

The Roman calendar was full of feasts and other celebrations to honor the gods and goddesses and to ensure divine favor for the city. As loyal citizens, most Romans joined in these festivals, which inspired a sense of community. Throughout Rome, dozens of temples housed statues of the gods. In front of these temples, Romans took part in ritual activities such as worshipping the gods and asking for divine assistance.

Checkpoint
What social rights did Roman women have?

World History I: The Romans Establish a Republic


The Romans Establish a Republic

The Romans drove out their Etruscan ruler in 509 B.C. This date is traditionally considered to mark the founding of the Roman state, which would last for 500 years. The Romans established their state with a form of government called in Latin a res publica, or “that which belongs to the people.” In this form of government, which today we call a republic, the people chose some of the officials. A republic, Romans thought, would prevent any individual from gaining too much power.

Structuring the Republic
In the early republic, the most powerful governing body was the senate. Originally, its 300 members were all patricians, or members of the landholding upper class. Senators, who served for life, strongly influenced the republic’s laws.

Each year, the senators nominated two consuls from the patrician class. Their job was to supervise the business of government and command the armies. Consuls, however, could serve only one term. They were also expected to approve each other’s decisions. By limiting their time in office and making them responsible to each other, Rome had a system of checks on the power of government.

In the event of war, the senate might choose a dictator, or ruler who has complete control over a government. Each Roman dictator was granted power to rule for six months. After that time, he had to give up power. Romans particularly admired Cincinnatus as a model dictator. Cincinnatus organized an army, led the Romans to victory over the attacking enemy, attended victory celebrations, and returned to his farmlands—all within 15 days.

Plebeians Fight for Their Rights
At first, all government officials were patricians. Plebeians (plih bee unz), the farmers, merchants, artisans, and traders who made up the bulk of the population, had little influence. The efforts of the plebeians to gain power shaped politics in the early republic.

In time, the plebeians gained the right to elect their own officials, called tribunes, to protect their interests. The tribunes could veto, or block, those laws that they felt were harmful to plebeians. Little by little, plebeians forced the senate to choose plebeians as consuls, appoint plebeians to other high offices, and finally to open the senate itself to plebeians.

Another breakthrough for the plebeians came in 450 B.C., when the government oversaw the inscription of the laws of Rome on 12 tablets, which were set up in the Forum, Rome’s marketplace. Plebeians had protested that citizens could not know what the laws were because they were not written down. The Laws of the Twelve Tables made it possible for the first time for plebeians to appeal a judgment handed down by a patrician judge.

Romans Leave a Lasting Legacy
Although the senate still dominated the government, the common people had gained access to power and won safeguards for their rights without having to resort to war or revolution. More than 2,000 years later, the framers of the United States Constitution would adapt such Roman ideas as the senate, the veto, and checks on political power.

Checkpoint
How did the membership of the senate change over time?