"The Federal Government Is Bankrupt" 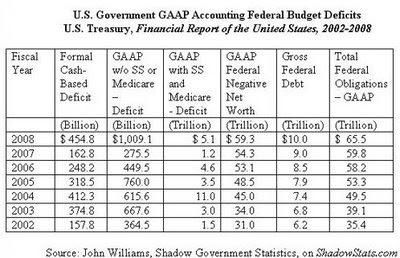 "The Federal Government Is Bankrupt"
With the passing of the Economic Stimulus bill, the cost estimate is $800 billion. The true deficit of the federal government should be grasped. The $65.5 trillion in total obligations exceeds the gross domestic product of the world.
The total U.S. obligations, including Social Security and Medicare benefits to be paid in the future, effectively have placed the U.S. government in bankruptcy, even before new continuing social welfare obligation, embedded in the Stimulus spending, is taken into account.

"As bad as 2008 was, the $455 billion budget deficit on a cash basis and the $5.1 trillion federal budget deficit on a GAAP accounting basis does not reflect any significant money [from] the financial bailout or Troubled Asset Relief Program, or TARP, which was approved after the close of the fiscal year," stated economist John Williams, who publishes the Internet website Shadow Government Statistics.
"The federal government's deficit is hemorrhaging at a pace which threatens the viability of the financial system," Williams added. "The popularly reported 2009 [deficit] will clearly exceed $2 trillion on a cash basis and that full amount has to be funded by Treasury borrowing.”

The Treasury has been largely dependent upon foreign buyers, principally China and Japan and other major holders of U.S. dollar foreign exchange reserves, including OPEC buyers purchasing U.S. debt through London.

"Social Security and Medicare must be shown as liabilities on the federal balance sheet in the year they accrue according to GAAP accounting," Williams argues. "To do otherwise is irresponsible, nothing more than an attempt to hide the painful truth from the American public. The public has a right to know just how bad off the federal government budget deficit situation really is, especially since the situation is rapidly spinning out of control.

"The federal government is bankrupt," Williams stated. "In a post-Enron world, if the federal government were a corporation such as General Motors, the president and senior Treasury officers would be in federal penitentiary."
How does this information impact young people today? Feel free to discuss career goals, college, and your prospects for the future.

Go to:
http://gmicksmithsocialstudies.blogspot.com/
On the right hand side of the blog, answer: how much is the “Debt Per Citizen?” Each citizen of the United States owes how much to pay the U.S. National Debt?

Print out the answer to the questions and hand in the “In-box” as HW for EC.