The online version of a portion of the Textbook is available.

Sr. has advised students to check online teaching materials (as we have been doing since the first day of school).

On October 5, about six thousand women marched 13 miles in the pouring rain from Paris to Versailles. “Bread!” they shouted. They demanded to see the king.

Much of the crowd’s anger was directed at the Austrian-born queen, One of the most interesting characters of the period is "Marie Antoinette," sometimes referred to as the Teen Queen, not to be confused with later teen queens. Marie Antoinette (daughter of Maria Theresa and brother of Joseph II). The queen lived a life of great pleasure and extravagance, and this led to further public unrest. Although compassionate to the poor, her small acts went largely unnoticed because her lifestyle overshadowed them. She was against reforms and bored with the French court. She often retreated to the Petit Trianon, a small chateau on the palace grounds at Versailles where she lived her own life of amusement.

The women refused to leave Versailles until the king met their most important demand—to return to Paris. Not too happily, the king agreed. The next morning, the crowd, with the king and his family in tow, set out for the city. At the head of the procession rode women perched on the barrels of seized cannons. They told bewildered spectators that they were bringing Louis XVI, Marie Antoinette, and their son back to Paris. “Now we won’t have to go so far when we want to see our king,” they sang. Crowds along the way cheered the king, who now wore the tricolor. In Paris, the royal family moved into the Tuileries (twee luh reez) palace. For the next three years, Louis was a virtual prisoner.

The National Assembly soon followed the king to Paris. Its largely bourgeois members worked to draft a constitution and to solve the continuing financial crisis. To pay off the huge government debt—much of it owed to the bourgeoisie—the Assembly voted to take over and sell Church lands.

Reaction was swift and angry. Many bishops and priests refused to accept the Civil Constitution. The pope condemned it. Large numbers of French peasants, who were conservative concerning religion, also rejected the changes. When the government punished clergy who refused to support the Civil Constitution, a huge gulf opened between revolutionaries in Paris and the peasantry in the provinces.

A New Constitution and New Fears

The National Assembly completed its main task by producing a constitution. The Constitution of 1791 set up a limited monarchy in place of the absolute monarchy that had ruled France for centuries. A new Legislative Assembly had the power to make laws, collect taxes, and decide on issues of war and peace. Lawmakers would be elected by tax-paying male citizens over age 25.

To moderate reformers, the Constitution of 1791 seemed to complete the revolution. Reflecting Enlightenment goals, it ensured equality before the law for all male citizens and ended Church interference in government. At the same time, it put power in the hands of men with the means and leisure to serve in government.


This is a file from the Wikimedia Commons. Painting information, Artist: Victor Adam
Title, English: Battle of Varoux in French Revolution 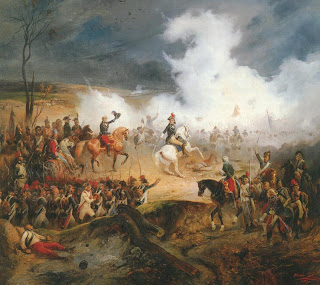 The radicals soon held the upper hand in the Legislative Assembly. In April 1792, the war of words between French revolutionaries and European monarchs moved onto the battlefield. Eager to spread the revolution and destroy tyranny abroad, the Legislative Assembly declared war first on Austria and then on Prussia, Britain, and other states. The great powers expected to win an easy victory against France, a land divided by revolution. In fact, however, the fighting that began in 1792 lasted on and off until 1815.

Rise of the Paris Commune

Paris, too, was in turmoil. As the capital and chief city of France, it was the revolutionary center. A variety of factions, or dissenting groups of people, competed to gain power. Moderates looked to the Marquis de Lafayette, the aristocratic “hero of two worlds” who fought alongside George Washington in the American Revolution. Lafayette headed the National Guard, a largely middle-class militia organized in response to the arrival of royal troops in Paris. The Guard was the first group to don the tricolor—a red, white, and blue badge that was eventually adopted as the national flag of France.

A more radical group, the Paris Commune, replaced the royalist government of the city. It could mobilize whole neighborhoods for protests or violent action to further the revolution. Newspapers and political clubs—many even more radical than the Commune—blossomed everywhere. Some demanded an end to the monarchy and spread scandalous stories about the royal family and members of the court.

The Sans-Culottes
by Albert Soboul 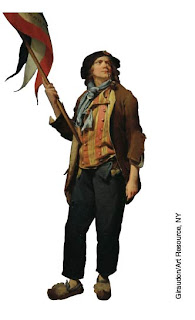 1. Evaluate Marie Antoinette. To what extent was she responsible for the problems that afflicted France?
2. Review the PBS information about Marie Antoinette. Is she a somewhat sympathetic figure or do you believe that she was a spendthrift who harmed France?
at 10/22/2009 12:07:00 AM