The concepts of goods, services, consumers, markets, factor markets, product markets, productivity, economic growth, and economic interdependence are explained and are linked in the circular flow diagram. Productivity is necessary for economic growth, and growth takes place when specialization and the division of labor are present. In addition, human capital, the sum of our skills, abilities, health, and motivations are other important components of growth. 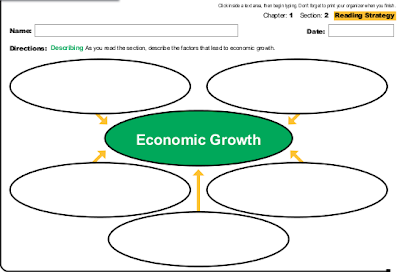 Products in the News

How are goods, services, and consumers related?

The Paradox of Value

How are value and utility related? 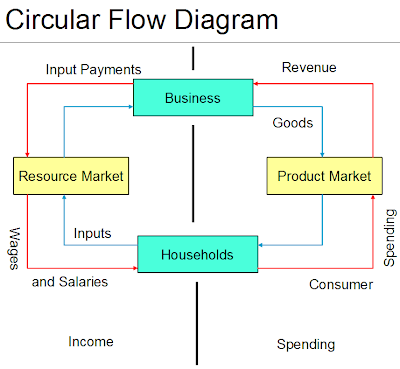 A brief video using the circular flow model to illustrate the basic nature of product markets and factor markets.

What roles do factor markets and product markets play in the economy?

Division of Labor and Specialization, p. 17

In The Wealth of Nations, Adam Smith argued that economic growth occurred as a result of specialization and division of labor. If each household produced every commodity it consumed, the total level of consumption and production in a society will be small. If each individual specializes in the productive activity at which they are "best," total output will be higher. Specialization provides such gains because it:

* allows individuals to specialize in those activities in which they are more talented,
* individuals become more proficient at a task that they perform repeatedly, and
* less time is lost switching from task to task.

Increased specialization by workers requires a growth in trade. Adam Smith argued that growing specialization and trade was the ultimate cause of economic growth.

Adam Smith and David Ricardo argued that similar benefits accrue from international specialization and trade. If each country specializes in the types of production at which they are best suited, the total amount of goods and services produced in the world economy will increase. Let's examine these arguments a bit more carefully.

Let's examine an example illustrating the difference between these two concepts. Suppose that the U.S. and Japan only produced two goods: CD players and wheat. The diagram below represents production possibilities curves for these two countries. (These numbers are obviously hypothetical).

Notice that the U.S. has an absolute advantage in the production of each commodity. To determine who has a comparative advantage, though, it is necessary to compute the opportunity cost for each good. It is assumed that the production possibilities curve (PPC) is linear to simplify this discussion (we will talk about the PPC in greater detail in a subsequent lesson).

If each country produces only those goods in which it possesses a comparative advantage, each good is produced in the global economy at the lowest opportunity cost. This results in an increase in the level of total output.

What role does specialization play in the productivity of an economy?


French thinkers known as physiocrats focused on economic reforms. Like the philosophes, physiocrats based their thinking on natural laws. The physiocrats claimed that their rational economic system was based on the natural laws of economics.


Physiocrats rejected mercantilism, which required government regulation of the economy to achieve a favorable balance of trade. Instead, they urged a policy of laissez faire (les ay fehr), allowing business to operate with little or no government interference. Physiocrats also supported free trade and opposed tariffs.


Scottish economist Adam Smith greatly admired the physiocrats. In his influential work The Wealth of Nations, he argued that the free market should be allowed to regulate business activity. Smith tried to show how manufacturing, trade, wages, profits, and economic growth were all linked to the market forces of supply and demand. Wherever there was a demand for goods or services, he said, suppliers would seek to meet that demand in order to gain profits. Smith was a strong supporter of laissez faire. However, he felt that government had a duty to protect society, administer justice, and provide public works. Adam Smith’s ideas would help to shape productive economies in the 1800s and 1900s.


Smith, a Scottish economist, argued that economies function most efficiently and fairly when individuals are allowed to pursue their own interests.

One person may decide to be a baker, another a merchant. One person may choose to sell his land, another to farm it. But all of these private decisions, made by rational, self-interested individuals, Smith argued, combine to produce a healthy, growing economy.


The great threat to economic growth, Smith argued, was government intervention—the government telling people what to do would only muck up the works. Government intervention distorted the natural and rational exercise of free, prudent choice. When left to their own natural operation, the private decisions made by thousands of rational economic players were tied into prosperous harmony by the “invisible hand” of the market.


If you haven't read his famous book, it's absolutely worth checking out, whether or not you consider yourself a disciple of the free market. The Wealth of Nations is, without a doubt, one of the most important books of all time. And the ideas it contained played a powerful role in shaping the development of American economic thought. The book is relevant it matters today what he wrote.


Adam Smith's metaphor of the invisible hand remains one of the most important and influential ideas in economics, even today. As Americans have recently grappled with questions about how government should and should not intervene in the economy, many have turned to Smith for guidance.

What would Adam Smith think about the stimulus bill? About universal government-organized health insurance? About bailouts for companies judged "too big to fail"?

A song/video made for a high school economics class. It was recorded by one person for all five parts using Audacity. The song is from the original "In the Still of the Night" recorded by the Five Satins and later covered by Boyz II Men.


Sometimes, a Song Says it Better: Billionaire, by Travis McCoy, 3:31


Travis wants to be a billionaire. Adam Smith would be proud.