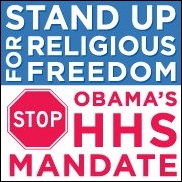 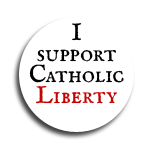 Watch video of the interaction, below (starts around 2:09):

What do you think? Is it “unfair” for religiously-affiliated institutions to deny birth control coverage? Take the poll:

Stand Up For Religious Freedom


At St. Brendan Church in San Francisco, the Rev. Michael Quinn stated the church's opposition to the contraceptive rules as: "I believe this is our Rosa Parks moment."

Visit becketfund.org/hhs to learn more about the legal challenges to the HHS mandate.

Congressman Gowdy tells Secretary Sebelius, "This mandate is going to wind up in the Supreme Court"

Sebelius admits she did not consult Supreme Court decisions on religious liberty when drafting HHS mandate.


The Bishops’ web site provides a recap of some of the profound statements about personal expression that were made by George Washington, Thomas Jefferson and James Madison. They read:

George Washington: “If I could have entertained the slightest apprehension that the Constitution framed in the Convention, where I had the honor to preside, might possibly endanger the religious rights of any ecclesiastical society, certainly I would never have placed my signature to it; and if I could now conceive that the general government might ever be so administered as to render the liberty of conscience insecure, I beg you will be persuaded that no one would be more zealous than myself to establish effectual barriers against the horrors of spiritual tyranny, and every species of religious persecution.” (Letter to the United Baptist Churches in Virginia, 1789.)

George Washington: “[T]he conscientious scruples of all men should be treated with great delicacy and tenderness; and it is my wish and desire, that the laws may always be [] extensively accommodated to them…” (Letter to the Annual Meeting of Quakers, 1789.)

Thomas Jefferson: “No provision in our Constitution ought to be dearer to man than that which protects the rights of conscience against the enterprises of the civil authority.” (Letter to New London Methodist, 1809.)

James Madison: “[T]he equal right of every citizen to the free exercise of his Religion according to the dictates of conscience is held by the same tenure with all our other rights. If we recur to its origin, it is equally the gift of nature; if we weigh its importance, it cannot be less dear to us; if we consult the Declaration of Rights which pertain to the good people of Virginia, as the basis and foundation of Government, it is enumerated with equal solemnity, or rather studied emphasis.” (Memorial and Remonstrance Against Religious Assessment, 1785.) (Internal quotation marks omitted.)

James Madison: “[W]e hold it for a fundamental and undeniable truth that religion, or the duty which we owe our Creator, and the manner of discharging it, can be directed only by reason and conviction, not by force or violence. The Religion then of every man must be left to the conviction and conscience of every man; and it is the right of every man to exercise it as these may dictate.” (Memorial and Remonstrance Against Religious Assessment, 1785.) (Internal citation and quotations omitted.)


The main goal of the campaign is to support religious liberty, while standing firm on Christian principles — particularly when it comes to the Church’s stance against the contraceptive mandate. Among the elements published on the Bishops’ web site is a prayer for religious freedom that drives home the Catholic Church’s beliefs on the matter:

O God our Creator,
Through the power and working of your Holy Spirit,
you call us to live out our faith in the midst of the world,
bringing the light and the saving truth of the Gospel
to every corner of society.
We ask you to bless us
in our vigilance for the gift of religious liberty.
Give us the strength of mind and heart
to readily defend our freedoms when they are threatened;
give us courage in making our voices heard
on behalf of the rights of your Church
and the freedom of conscience of all people of faith.
Grant, we pray, O heavenly Father,
a clear and united voice to all your sons and daughters
gathered in your Church
in this decisive hour in the history of our nation,
so that, with every trial withstood
and every danger overcome—
for the sake of our children, our grandchildren,
and all who come after us—
this great land will always be “one nation, under God,
indivisible, with liberty and justice for all.”
We ask this through Christ our Lord.
Amen.

The Washington Archdiocese created a video to showcase the meaning of religious freedom:

Fr. Andrew was invited to lead the opening prayer at the 2012 Colorado Republican State Assembly and Convention in the Magness Arena at the University of Denver. The moral challenges facing our country are not caused by political affiliation, but rather by attacks on religious freedom. He invites all people of conscience to uphold religious freedom.
"The Church has rejected the totalitarian and atheistic ideologies associated in modem times with 'communism' or 'socialism.'" - Catechism of the Catholic Church 2425

The Pro-Life Action League and Citizens for a Pro-Life Society are pleased to announce that the next Stand Up for Religious Freedom Rally will take place on Friday, June 8, in cities and towns across the United States.

On that day, over 63,000 Americans came out in 145 cities coast to coast pushed back against the new mandate from the U.S. Department of Health and Human Services (HHS) that requires all employers provide free contraceptives, sterilization and abortion-inducing drugs through their health plans, even in violation of their consciences.

Now the fight continues with the next Stand Up Rally on Friday, June 8.

Right now the entire Obamacare law, with its oppressive mandates and abortion loopholes, is under review by the United States Supreme Court. A ruling is coming at the end of June.

If the Supreme Court strikes down Obamacare, the June 8 Rally sets the agenda for future health care reform, demanding respect for religious liberty and freedom of conscience.

But if the Court leaves Obamacare intact, the June 8 Rally advances our demand that the HHS Mandate must go.

Come out on June 8, 2012—the 223rd anniversary of the day our Founding Father James Madison introduced the Bill of Rights, with its guarantee of religious freedom, to the First Congress—and stand up for religious freedom!

Rev. Rob Schenck of Faith and Action and the National Clergy Council addresses about a thousand people at a religious liberty rally in Philadelphia's Independence Square. The gathering was a response to the Obama Administration's order for religious groups to comply with health insurance mandates that contradict meal and ethical practices.
Rabbi Cary Kozberg at the Columbus Stand Up for Religious Freedom Rally, June 8, 2012

DO AMERICANS KNOW MORE ABOUT RELIGIOUS FREEDOM OR AMERICAN IDOL?

Among the big news stories this week (27 May 2012) were two very different issues:
So, we have the issue of religious freedom — a cornerstone of our nation and something many people believe is worth fighting and dying over – versus a 13-week televised singing competition.
Which do you think Americans will know more about? Considering the fact that almost 24 percent of the adults in this country are Catholic, you might expect at least some of them to know about the legal action taken by their church to protect their right to practice their faith without government direction or interference. Then again, maybe not.


BY PUTTING RELIGIOUS INSTITUTIONS AGAINST THEIR CONSCIENCES OBAMACARE FALLS SHORT

Obama is an “extreme secularist.”
“The Church will survive the entrenched corruption and sheer incompetence of our Illinois state government, and even the calculated disdain of the President of the United States, his appointed bureaucrats in HHS [Health and Human Services], and of the current majority of the federal Senate.”
“Remember that in past history other governments have tried to force Christians to huddle and hide only within the confines of their churches like the first disciples locked up in the Upper Room.
“In the late 19th century, Bismarck waged his ‘Kulturkampf,’ a Culture War, against the Roman Catholic Church, closing down every Catholic school and hospital, convent and monastery in Imperial Germany.
“Clemenceau, nicknamed ‘the priest eater,’ tried the same thing in France in the first decade of the 20th Century.
“Hitler and Stalin, at their better moments, would just barely tolerate some churches remaining open, but would not tolerate any competition with the state in education, social services, and health care.
“In clear violation of our First Amendment rights, President Obama—with his radical, pro-abortion and extreme secularist agenda, now seems intent on following a similar path.”
“This fall,” said Bishop Jenky, “every practicing Catholic must vote, and must vote their Catholic consciences, or by the following fall our Catholic schools, our Catholic hospitals, our Catholic Newman Centers, all our public ministries—only excepting our church buildings—could easily be shut down. Because no Catholic institution, under any circumstance, can ever cooperate with the instrinsic [sic] evil of killing innocent human life in the womb.”
April 16, 2012, Men's March Homily
Podcast
Religious Liberty HHS Mandate

RT speech at Stand Up Detroit rally, March 23, 2012
Is this a reasonable policy or is this governmental bullying? Why do you think so?

On February 5, 2012 Father Sammie Maletta delivered a Homily at St. John the Evangelist Parish in St. John, Indiana. This Homily addressed how Obama is threatening Religious Freedom and declaring war with the Catholic Church. Go to http://bit.ly/zPdgpw to fight the HHS Mandate.
SPOTTED: Contraceptives near Georgetown law school
Are contraceptives readily available, and inexpensive or free, adjacent to Georgetown University, without a government mandate compromising religious liberty?


Should the government determine how religions operate? Why or why not?


The controversy over the Obama Administration's anti-conscience mandate and the fight for religious liberty only serves to highlight the inherent flaws in Obamacare.


The group is accusing the government of religious discrimination.
Obama's abortion absolutism and the 1st Amendment


Obama is deciding to crack down on those protesting, conducting sidewalk counseling, or even praying for the mothers and their babies.
Dick Retta is "not deterred by . . . by a civil lawsuit the Justice Department filed against him in July."


"This President, as a State Senator, voted against a bill requiring doctors to care for babies born after failed abortions (and then misled the media on the matter). As a candidate, he promised his first act would be signing the sweeping "Freedom of Choice Act," which would wipe out nearly all limitations on abortion and abortion subsidies. And then during the budget debates we saw him draw nearly his only line in the sand over Planned Parenthood subsidies. It's abortion absolutism. Everything else -- free assembly, free speech, conscience protection, and his party's other interests -- they all take a back seat to protecting abortion."
Catholics, during the current regime, are restricted in exercising their civil rights of religious liberty and free speech under the First Amendment.
References from the United States Conference of Catholic Bishops on Religious Liberty