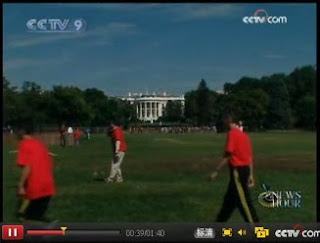 The White House, 20 September 2009, as viewed from the Ellipse and the raising of the Chinese flag in Washington, D.C.

The flag of the communist Chinese regime has been raised over festivities near the White House honoring the nation's 60th anniversary, according to reports from the propaganda of the Chinese Central television network's English-language report. It was the first time the Chinese national flag was raised in a public place in Washington.

Reservations about praising China included those veterans and other Americans who referred to Chosin. This was a Korean War conflict in which 60,000 troops from China crossed into North Korea to attack American troops at the Chosin reservoir. More than 4,000 Americans died.

A related scene unfolded at the U.N. where Obama declared:

"No world order that elevates one nation or group of people over another will succeed." Obama continued: "The world must stand together to demonstrate that international law is not an empty promise and that treaties will be enforced."

For the Quiz tomorrow, Friday, you need a pencil.

According to Hobbes, life in the “state of nature” is `nasty, short, and brutish.'

In contrast, Locke thought people were basically reasonable and moral. Further, they had certain natural rights, or rights that belonged to all humans from birth. These included the right to life, liberty, and property.

Locke proposed radical ideas for his time. A government, he said, has an obligation to the people it governs. If a government fails its obligations or violates people’s natural rights, the people have the right to overthrow that government.

Voltaire was a passionate defender of individual freedom.

Probably the most famous of the philosophes was François-Marie Arouet, who took the name Voltaire. “My trade,” said Voltaire, “is to say what I think,” and he did so throughout his long, controversial life.

Voltaire used biting wit as a weapon to expose the abuses of his day. He targeted corrupt officials and idle aristocrats. With his pen, he battled inequality, injustice, and superstition. He detested the slave trade and deplored religious prejudice.

Voltaire’s outspoken attacks offended both the French government and the Catholic Church. He was imprisoned and forced into exile. Even as he saw his books outlawed and even burned, he continued to defend the principle of freedom of speech.

Montesquieu Advances the Idea of Separation of Powers

Another early and influential thinker was Baron de Montesquieu (mahn tus kyoo). Montesquieu studied the governments of Europe, from Italy to England. He read about ancient and medieval Europe, and learned about Chinese and Native American cultures. His sharp criticism of absolute monarchy would open doors for later debate.

Born to wealth, Charles Louis de Secondat (1689–1755) inherited the title Baron de Montesquieu from his uncle. Like many other reformers, he did not let his privileged status keep him from becoming a voice for democracy.

His first book titled Persian Letters ridiculed the French government and social classes. In his work published in 1748, The Spirit of the Laws, he advanced the idea of separation of powers—a foundation of modern democracy.

In 1748, Montesquieu published The Spirit of the Laws, in which he discussed governments throughout history. Montesquieu felt that the best way to protect liberty was to divide the various functions and powers of government among three branches: the legislative, executive, and judicial.

He also felt that each branch of government should be able to serve as a check on the other two, an idea that we call checks and balances. Montesquieu’s beliefs would soon profoundly affect the Framers of the United States Constitution.

Denis Diderot (dee duh roh) worked for years to produce a 28-volume set of books called the Encyclopedia. As the editor, Diderot did more than just compile articles.

His purpose was “to change the general way of thinking” by explaining ideas on topics such as government, philosophy, and religion. Diderot’s Encyclopedia included articles by leading thinkers of the day, including Montesquieu and Voltaire.

In these articles, the philosophes denounced slavery, praised freedom of expression, and urged education for all. They attacked divine-right theory and traditional religions. Critics raised an outcry.

The French government argued that the Encyclopedia was an attack on public morals, and the pope threatened to excommunicate Roman Catholics who bought or read the volumes.

Despite these and other efforts to ban the Encyclopedia, more than 4,000 copies were printed between 1751 and 1789. When translated into other languages, the Encyclopedia helped spread Enlightenment ideas throughout Europe and across the Atlantic Ocean to the Americas.

Jean-Jacques Rousseau (roo soh), believed that people in their natural state were basically good. This natural innocence, he felt, was corrupted by the evils of society, especially the unequal distribution of property.

Many reformers and revolutionaries later adopted this view. Among them were Thomas Paine and Marquis de Lafayette, who were leading figures of the American and French Revolutions.

In 1762, Rousseau set forth his ideas about government and society in The Social Contract. Rousseau felt that society placed too many limitations on people’s behavior.

He believed that some controls were necessary, but that they should be minimal. Additionally, only governments that had been freely elected should impose these controls.

Rousseau put his faith in the “general will,” or the best conscience of the people. The good of the community as a whole, he said, should be placed above individual interests.

Rousseau has influenced political and social thinkers for more than 200 years. Woven through his work is a hatred of all forms of political and economic oppression. His bold ideas would help fan the flames of revolt in years to come.

The Enlightenment slogan “free and equal” did not apply to women. Though the philosophes said women had natural rights, their rights were limited to the areas of home and family.

By the mid- to late-1700s, a small but growing number of women protested this view. Germaine de Staël in France and Catharine Macaulay and Mary Wollstonecraft in Britain argued that women were being excluded from the social contract itself. Their arguments, however, were ridiculed and often sharply condemned.

Wollstonecraft was a well-known British social critic. She accepted that a woman’s first duty was to be a good mother but felt that a woman should be able to decide what was in her own interest without depending on her husband.

In 1792, Wollstonecraft published A Vindication of the Rights of Woman. In it, she called for equal education for girls and boys. Only education, she argued, could give women the tools they needed to participate equally with men in public life.

HW, if and when you have written work, you can email the answers to me gmsmith@shanahan.org.

1. Review material, daily posts, and in particular, the Shanawiki page (http://shanawiki.wikispaces.com/) for updated class information about the 10 Question Quiz, Friday. You need a pencil.
2. Post any questions you may have on the Shanawiki Chapter 10 Section 1 page.
3. Catholic identity: whose feast day is celebrated on 30 September? What can you find out about this feast day and why would this day in particular be important to students?