Hear and Witness History
The Glory That Would Be Rome


Of the many accomplished artists and writers who lived in ancient Rome, the poet Virgil may be most beloved. His epic poem, the Aeneid, describes the history of Rome from the city’s founding through the establishment of one of the world’s great empires.

My son, noble Rome shall equal her power with earth,

Her might with Olympus [home of the Greek gods],

He shall found once again an era of gold in the land Of Latium [the land surrounding Rome] . . .”


Publius Vergilius Maro (October 15, 70 BC – September 21, 19 BC), usually called Virgil or Vergil /ˈvɜrdʒəl/ in English, was an ancient Roman poet of the Augustan period. He is known for three major works of Latin literature, the Eclogues (or Bucolics), the Georgics, and the epic Aeneid. A number of minor poems, collected in the Appendix Vergiliana, are sometimes attributed to him.

Virgil is traditionally ranked as one of Rome's greatest poets. His Aeneid has been considered the national epic of ancient Rome from the time of its composition to the present day. Modeled after Homer's Iliad and Odyssey, the Aeneid follows the Trojan refugee Aeneas as he struggles to fulfill his destiny and arrive on the shores of Italy—in Roman mythology the founding act of Rome. Virgil's work has had wide and deep influence on Western literature, most notably the Divine Comedy of Dante, in which Virgil appears as Dante's guide through hell and purgatory. 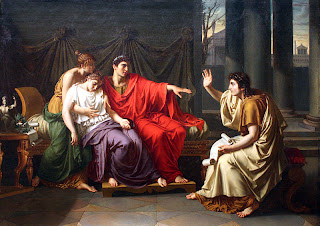 This is a file from the Wikimedia Commons. Commons is a freely licensed media file repository.

The Aeneid is widely considered Virgil's finest work and one of the most important poems in the history of western literature. Virgil worked on the Aeneid during the last ten years of his life (29-19 BC), commissioned, according to Propertius, by Augustus.[10] The epic poem consists of 12 books in hexameter verse which describe the journey of Aeneas, a prince fleeing the sack of Troy, to Italy, his battle with the Italian prince Turnus, and the foundation of a city from which Rome would emerge. The Aeneid's first six books describe the journey of Aeneas from Troy to Rome. Virgil made use of several models in the composition of his epic;[7] Homer the preeminent classical epicist is everywhere present, but Virgil also makes especial use of the Latin poet Ennius and the Hellenistic poet Apollonius of Rhodes among the various other writers he alludes to. Although the Aeneid casts itself firmly into the epic mode, it often seeks to expand the genre by including elements of other genres such as tragedy and aetiological poetry. Ancient commentators noted that Virgil seems to divide the Aeneid into two sections based on the poetry of Homer; the first six books were viewed as employing the Odyssey as a model while the last six were connected to the Iliad.[11]

Book 1[12] (at the head of the Odyssean section) opens with a storm which Juno, Aeneas' enemy throughout the poem, stirs up against the fleet. The storm drives the hero to the coast of Carthage, which historically was Rome's deadliest foe. The queen, Dido, welcomes the ancestor of the Romans, and under the influence of the gods falls deeply in love with him.
At a banquet in Book 2, Aeneas tells the story of the sack of Troy, the death of his wife, and his escape to the enthralled Carthaginians, while in
Book 3 he recounts to them his wanderings over the Mediterranean in search of a suitable new home. Jupiter in
Book 4 recalls the lingering Aeneas to his duty to found a new city, and he slips away from Carthage, leaving Dido to commit suicide, cursing Aeneas and calling down revenge in a symbolic anticipation of the fierce wars between Carthage and Rome.
In Book 5, Aeneas' father Anchises dies and funeral games are celebrated for him. On reaching Cumae, in Italy
in Book 6, Aeneas consults the Cumaean Sibyl, who conducts him through the Underworld where Aeneas meets the dead Anchises who reveals his Rome's destiny to his son.

Book 7 (beginning the Iliadic half) opens with an address to the muse and recounts Aeneas arrival in Italy and betrothal to Lavinia, daughter of King Latinus. Lavinia had already been promised to Turnus, the king of the Rutulians, who is roused to war by the Fury Allecto and Amata Lavinia's mother.
In Book 8, Aeneas allies with King Evander, who occupies the future site of Rome, and is given new armor and a shield depicting Roman history.
Book 9 records an assault by Nisus and Euryalus on the Rutulians,
Book 10, the death of Evander's young son Pallas, and
Book 11 the death of the Volscian warrior princess Camilla and the decision to settle the war with a duel between Aeneas and Turnus. The Aeneid ends in
Book 12 with the taking of Latinus' city, the death of Amata, and Aeneas' defeat and killing of Turnus, whose pleas for mercy are spurned. 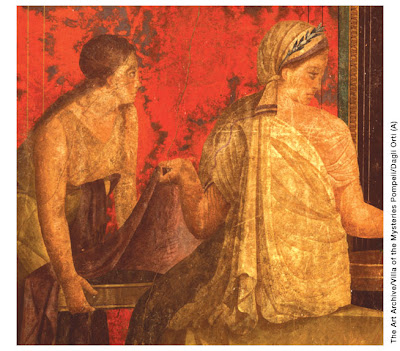 Roman artists are famous for colorful wall paintings like this one that features the lives of everyday Romans.


Learn
Chapter Focus Question
How did Rome grow from a single city to a huge, diverse empire?


A Rap that takes you through Virgil's epic poem, The Aeneid.
Recorded by TPaul and Shelbytime.
Shout outs to AP Latin Vergil LSC
Tiggles
Shauble
Brad Pitt
The Kraken

Would you like to read the Aeneid of Virgil in its original Latin? That is the goal I have set for myself, and these videos will allow anyone interested to follow me on that journey. This explanatory video introduces the Aeneid and the methodology I will be using. If you think these videos might be of interest to you I'd love to hear about it in a comment.

Aeneid by Virgil on Prezi