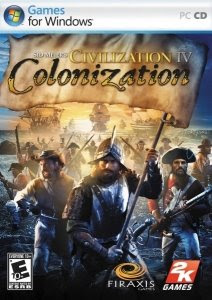 Civilization IV: Colonization is a standalone title in the Civilization series, released in September 2008 for the PC, approximately one year after Beyond the Sword, the next most recent Civ4 expansion. Despite the fact that Civ4 is not needed to run the game, many elements have stayed the same, making Colonization both an old and new game. On the one hand, it is very similar to the 1994 classic, Sid Meier's Colonization, keeping intact the founding fathers system, economic model, and overall goals (see below). However, this game utilizes the Civ4 engine, interface, and graphics, enhancing it for sure, but relying on the quality of Civ4 to provide a foundation.

In short, this game is unique: instead of spanning a few thousand years, like in Civilization, Colonization zooms in on just a few centuries. The focus is the Age of Discovery, exploration, empire-building, and, later, indepedence. Players must found and grow their colonies while simultaneously balancing the requests and demands of natives and European kings, all with the intention of one day, if successful, creating a new nation through war. Though many common elements (war and peace, diplomacy, expansion, etc.) are present, Colonization combines them in a way that provides for an unparalled experience.

Below are key features of the game. Be sure to check out the other pages on this site for even more detailed info!

Economics
The colonial, supply-and-demand economy plays a key role in the growth of your empire. The primary goal of the game is simple: acquire raw resources from the neighboring land, bring them to cities via boat or wagon, and manufacture them into finished goods for sale in Europe, generating a profit and allowing the cycle to repeat. Although the process may sound one-dimensional, the methods certainly are not, and there are various ways to generate cash: finding treasure, parttaking in the Columbian Exchange with the natives, trading with other colonies, or sailing all the way to Europe. Unlike in Civ4, resources are in specific amounts: for example, creating a soldier requires 50 guns, not simply access to some resource. Thus, Colonization contains a much more realistic and in-depth economic model than Civilization 4.

Europe
Trade with Europe is the cornerstone of the game and vital to your colonies' success. Goods can be bought and sold, and individuals can be recruited to join your empire. In particular, Europe supplies experienced workers who are much more efficient than typical, unspecialized colonists. However, they also cost more, making your decisions regarding the workforce important. Your European King will also request money and tax increases from you, providing for potential conflict and affecting his stance towards your revolution.

Natives
In addition to other European countries, you must handle the natives who already inhabit the lands. They come into play in a variety of ways: offering the occasional gift of resources if relations are strong, demanding that you compensate them for their territory if you found a colony near them, or even declaring war on you if they deem you too invasive. Conversely, they might help you out in your fight versus the European king. Native burial grounds, like Civ4 goody huts, also cover the land, offering bonuses of gold, experience, treasure, or more to the first to discover.

Founding Fathers
Founding Fathers essentially are to Colonization what Great People are to Civilization 4: historical figures that provide a significant boost to your empire. By acquiring Political, Religious, Exploration, Trade, and Military points, you increase your chances of getting an offer from a Founding Father to join your empire and take a place in your Continental Congress. These individuals might provide an economic boost (increased production of a resource, for example) or military bonus (free promotions, etc.). Keep in mind that only one colonial empire can receive each Founding Father.

Revolution
Finally, once a player's colonies have become sufficiently developed and contain enough "rebel sentiment", a revolution can be declared and war with the motherland will ensue. As you scramble to defend your colonies, equipping colonists with guns and horses, the king will send over a Royal Expeditionary Force to squash the rebellion. In order to win the game, you must defeat all the king's land forces.

Multiplayer
Multiplayer is fully supported for Colonization, and players have the option of squaring off in a variety of ways: traditional Internet lobby or LAN games, Play by Email, Direct IP, or Hotseat. Games can have a maximum of 8 players, meaning that two players can work cooperatively to control one colony. Visit the Multiplayer forum for more info.

Customization
Like Civ4, Colonization is extremely moddable: Python, XML, and even the SDK (Software Development Kit) can be used to create simple mods or total conversions. The in-game WorldBuilder allows map editing, resource and unit placement, and the creation of scenarios on historical maps. For more discussion about modding, check out the Creation & Customization forum!