Chapter 5 Ancient Rome and the Rise of Christianity 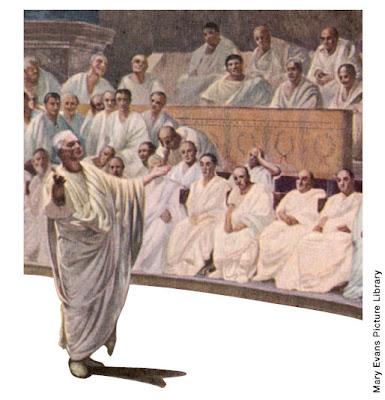 How did Rome grow from a single city to a huge, diverse

From Republic to Empire

The Rise of Christianity

Describe the physical and cultural settings in which Roman civilization arose.
*

Outline how the Roman republic was structured and governed.
*

Understand the rights and religious practices that characterized Roman society.
*

Explain how the Roman republic grew and maintained its conquests.

At the time the state of Rome was founded, the Romans’ many neighbors on the Italian peninsula included other speakers of Italic languages such as Latin.

2. Region
Based on this map, which group would you think most influenced the Romans? Explain.

3. Make Generalizations
What do you think are some advantages and disadvantages of living near a variety of different peoples?

How did geography influence the origins and expansion of Rome?

How did the membership of the senate change over time?

What social rights did Roman women have?

Note Taking
Reading Skill: Identify Causes and Effects
2. Use your completed cause-and-effect chart to answer the Focus Question: What values formed the basis of Roman society and government?

Comprehension and Critical Thinking
Summarize
3. Describe the cultural setting in which Rome developed.
Identify Central Issues
4. In both Roman politics and Roman society, equality was prized. Describe an example of Romans achieving political or social equality.
Recognize Cause and Effect
5. What were two reasons for Rome’s success in expanding its power across Italy?

Section 2 From Republic to Empire
Objectives

Understand how the Roman republic grew through a series of conquests.
*

Identify the events leading to the decline of the Roman republic.
*

Describe the nature of the new age that dawned with the Roman empire.

Although Hannibal (below) posed a challenge, the Roman republic gradually gained control of lands around the Mediterranean Sea through conquest and diplomacy.

During what period did Asia Minor come under Roman control?

What does this map tell you about the outcome of the Punic Wars with Carthage, which lasted from 264 B.C. to 146 B.C.?

What challenges did Rome face while building an empire around the Mediterranean Sea?

What central issue sparked the warfare that eventually led to the decline of Rome?

How did Augustus lay the foundation for stable government in the Roman empire?

The bold rise to power of Julius Caesar (100 B.C. [?]–44 B.C.) echoed his boldness on the battlefield (at left). His brilliant conquest of Gaul made him enormously popular. Romans were thrilled by reports of his many victories, which added great riches and huge territories to the empire. In nine years of campaigning, Caesar lost only two battles. His tactics in Gaul are still studied at military academies today.

When Caesar, in defiance of Pompey’s orders, crossed the Rubicon River from Gaul back into Italy, he said, “iacta alea est,” or “the die is cast,” meaning there was no turning back. Today, people use the phrase “crossing the Rubicon” to mean making a decision from which there is no turning back. Painters and writers such as William Shakespeare have also immortalized Caesar in their works.

In what different ways did Caesar leave a lasting impact on the world?

Note Taking
Reading Skill: Recognize Multiple Causes
2. Use your completed chart to answer the Focus Question: What factors led to the decline of the Roman republic and the rise of the Roman empire?

Comprehension and Critical Thinking
Make Comparisons
3. Compare the positive and negative results of conquest for Rome. Which do you think had the most impact?

Predict Consequences
4. Do you think the reforms Caesar enacted would have been enough to maintain the Roman republic, had he not been killed?

Analyze Information
5. How do you think the founders of the Roman republic would have viewed the government of the Roman empire?

Summarize the works of Roman literary figures, historians, and philosophers.
*

Describe the art and architecture developed by the Romans.
*

Understand how the Romans applied science and mathematics for practical use.
*

Explain how Rome’s legal codes protected everyone in the empire.

In this passage, Livy (shown below) comments on the importance of studying history. In what ways does he say we can learn from history?

“. . . in history you have a record of the infinite variety of human experience plainly set out for all to see; and in that record you can find for yourself and your country both examples and warnings: fine things to take as models, base things, rotten through and through, to avoid.”

—Livy, The History of Rome

How did Roman writers promote patriotism?

Who in the Roman empire engaged in scientific research? Who put science to practical use?

What were the basic principles of Roman law?

Note Taking
Reading Skill: Understand Effects
2. Use your completed concept web to answer the Focus Question: How did advances in arts, learning, and the law show the Romans’ high regard for cultural and political achievements?

Comprehension and Critical Thinking
Make Generalizations
3. How did Greek culture influence the development of Roman civilization?

Synthesize Information
4. How did Romans use science and mathematics to improve life in the empire?

Determine Relevance
5. Give two examples of how Roman principles of law affect life in the United States today.

Section 4 The Rise of Christianity
Objectives

Understand the diverse religions included in the early Roman empire.
*

Summarize the teachings of Jesus and how they were spread.
*

Outline the development of the early Christian Church.

What was Rome’s policy toward most of the religions in the empire?

What aspects of Jesus’ message were unique?

What factors enabled Christianity to spread throughout the Roman empire?

How was the early Christian clergy organized?

In the Sermon on the Mount, Jesus (below) summarized his ethical message, which echoed Jewish ideas of mercy and sympathy for the poor and helpless. What does he say is the reward for being merciful?

“Blessed are the meek, for they shall inherit the earth.

Blessed are those who hunger and thirst for righteousness, for they shall be satisfied.

Blessed are the merciful, for they shall obtain mercy.

Blessed are the pure in heart, for they shall see God.

Blessed are the peacemakers, for they will be called sons of God.”

Aided by the work of Paul and other missionaries, Christianity gradually spread across the Roman empire.

In what areas did Paul travel on his first journey?

How did the extent of Christianity in A.D. 325 compare to that in A.D. 476? Was there a significant difference?

As the chief apostle, Peter (d. A.D. 64(?)) devoted his life to spreading the teachings of Jesus. He had been born with the name Simon, but according to the New Testament Jesus changed his name, saying, “Thou art Peter, and upon this rock I will build my church.”

Peter became a missionary and is said to have later become the first bishop of both Antioch and Rome. However, his devotion to Jesus and Christianity cost him his life. Tradition tells of Peter’s persecution under the Roman emperor Nero. In one account, when Peter learns he is to be crucified, he insists on being turned upside down, saying he is not worthy of dying in the same way that Jesus had. What does Peter’s behavior indicate about his devotion to his faith?

2. Use your completed chart to answer the Focus Question: How did Christianity emerge and then spread to become the official religion of the Roman empire?

Comprehension and Critical Thinking
Identify Central Issues
3. Why were many Jews unhappy under Roman rule even though the Romans were tolerant of their religion?

Synthesize Information
4. What were three basic teachings of Jesus?

Explain how and why the Roman empire divided.
*

Describe how waves of invaders contributed to the decline of the Roman empire.
*

Identify the various types of problems that led to the fall of Rome.

How do you think Rome’s unstable government affected the economy?

How did the Hun invasion weaken the Roman empire?

What social problems contributed to the decline of the Roman empire?

Comparing Viewpoints
What Kind of Downfall?

Historians have long held that the “fall of Rome” was an important historical event, but they argue over many details.

Critical Thinking What about Rome’s end most surprises Gibbons? How does Brown differ with Gibbons on this point?

Note Taking
Reading Skill: Recognize Multiple Causes
2. Use your completed chart to answer the Focus Question: How did military, political, social, and economic factors combine to cause the fall of the western Roman empire?

Comprehension and Critical Thinking
Summarize
3. Describe the crisis that afflicted the Roman empire after the Pax Romana ended. How did Diocletian try to resolve the crisis?

Express Problems Clearly
4. How did the successes of invaders such as the Huns reveal the fading power of the Roman empire?

Identify Central Issues
5. What features of the western Roman empire survived after the year 476?