The Culture of Classical Greece

Section 1 Early Civilizations in Greece
The Minoan civilization flourished on the island of Crete from 2700 B.C. to 1450 B.C. Most historians believe it was destroyed by the Mycenaeans from the Greek mainland. The Mycenaean civilization consisted of powerful monarchies that flourished between 1600 B.C. and 1100 B.C. After the collapse of this civilization, Greece entered a period known as the Dark Age. Food production decreased, and the population declined. At the same time, Greeks sailed extensively on the Aegean Sea and settled on islands and in Asia Minor. Iron replaced bronze in the making of tools and weapons. During the eighth century, the Greeks adopted the Phoenician alphabet, and Homer wrote his famous epic poems, the Iliad and the Odyssey, chronicling the Trojan War.

Section 2 The Greek City-States
By 750 B.C. independent city-states became the focus of Greek life. Trade and the search for new farmland led to colonies throughout the western Mediterranean and the spread of Greek culture. Trade also produced a new group of wealthy individuals who resented the power of the aristocrats. The new rich, along with many peasants, supported the rise of tyrants who seized power from the aristocrats. When the rule of tyrants declined, some city-states became oligarchies. In Sparta, a military state, a small group of men decided what issues to place before adult male voters. In Athens, aristocratic rule dissolved into political strife between peasants and aristocrats. Leadership shifted between reform-minded aristocrats and tyrants, until land reform and an assembly served as the foundations of Athenian democracy.

Section 3 Classical Greece
As the Greeks spread throughout the Mediterranean, they came into conflict with the Persians. Although Athens itself was partly destroyed in a war, Greece emerged victorious, and Athens became the center of power of a Greek empire. Pericles was the dominant figure in Athens and undertook the rebuilding of the city. During the Age of Pericles, the Greek empire expanded. At home, a direct democracy flourished, in which all adult male citizens could vote. A woman's primary role was to be a good wife, mother, and manager of the household. Distrust between Athens and Sparta led to the Great Peloponnesian War. After Athens was badly defeated, Sparta, Athens, and Thebes struggled to dominate Greek affairs.

Section 4 The Culture of Classical Greece
Religion was central to daily life in Greece. The Greek religion focused on performing rituals to gain the favor of the Greek gods. To learn the will of the gods, Greeks made use of oracles. Greek drama developed during this period. Classical Greek philosophers, such as Socrates, Plato, and Aristotle, devoted themselves to rational thought as a means of understanding the nature of the universe. Aristotle also created the foundations of Western science. Herodotus and Thucydides wrote the first histories in Western civilization with their lengthy works on the Persian and Peloponnesian wars respectively. Classical Greek art, which sought to express eternal ideals, is reflected in temples and sculptures.

Section 5 Alexander and the Hellenistic Era
In 359 B.C., Philip II came to the throne in Macedonia and built a powerful army. He longed to unite Greece and Macedonia. Fearful of Philip's intentions, the Greeks formed a defensive alliance, but they were defeated. Philip's son Alexander, who became known as Alexander the Great, within a few years defeated the Persian Empire and expanded his empire as far east as modern Pakistan. Although Alexander's empire was short-lived, it was successful in spreading Greek culture in the region. During the Hellenistic Era, Greek colonies thrived in Southwest Asia, and important works of science, philosophy, art, and architecture were produced throughout the Hellenistic world.

Student Web Activity Lesson Plans Alexander the Great
Introduction
Alexander conquered a large amount of territory in a remarkably short time. Despite his many invasions and conquests, he gained the respect of many of those he conquered by showing respect for local cultures and rulers. Although his empire was short-lived, it left an enduring Greek cultural imprint on the civilizations that had been conquered. In this activity students will learn more about Alexander's life and conquests.

Introduction
Alexander conquered a large amount of territory in a remarkably short time. Despite his many invasions and conquests, he gained the respect of many of those he conquered by showing respect for local cultures. Although his empire was short-lived, it left an enduring Greek influence on the civilizations he conquered. In this activity you will learn more about Alexander's life and conquests.

Scroll through the Website and read the information.
Take notes as you scan the text.
Use the information you found to answer the following questions.

1. What is the legend of the Gordian knot?


2. Give an example of Alexander's attempts to blend Greek and Persian cultures.


3. What did Alexander do when he found the Persian King Darius, his main opponent, dead? Analyze the reasons for his actions.

4. How did Alexander treat important local rulers, such as Porus, a powerful Indian leader?


5. Write a short newspaper article from an Indian or Persian perspective reporting on local reactions to Alexander's conquest. As you "report," take into account as many consequences of the invasion as you can identify from your reading.


2. Alexander married a Persian woman. He also established programs to teach the Persians about Greek and Macedonian cultures, and he encouraged marriage between his officers and Persian women.


3. When the emperor Darius was killed by his own men, Alexander executed the men and gave Darius a royal funeral. Alexander’s actions show respect toward the Persian ruler, but they also suggest that Alexander wanted to win over the support of the Persians.

4. Alexander treated many of his defeated enemies with great respect. Following the capture of Porus, Alexander allowed Porus to continue to govern. Alexander even granted Porus an additional province.

5. Students' newspaper articles will vary but should include details on Alexander's conquests mentioned on the Web site.


In-class
Reading Strategy
Compare and Contrast
Use the diagram to help you study for the Minoan and Mycenaean civilizations. 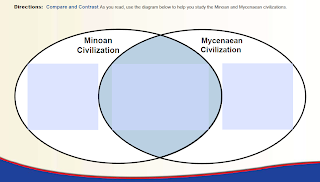 Section Spotlight Video
Early Civilizations in Greece
http://www.glencoe.com/video_library/index_with_mods.php?PROGRAM=9780078745256&VIDEO=3967&CHAPTER=4&MODE=2
Section Spotlight Video Transcript
Early Civilizations in Greece
Male Speaker: Now if there was a Trojan war, we would look to the layer six, which is the fortification wall which you can see over there. Narrator: A very different Troy emerged from that layer. With physical features that seem to match some of Homer’s descriptions. Here seemed to be his fine towers…his wide streets and lofty gates. The city was indeed well walled, as the myth described. The city that emerged seemed to be drawn from the pages of Homer. Here was a royal citadel, robustly defended, with imposing watch towers dominating the land as Homer described, but there was one feature that just didn’t fit the myth. The city of legend had been mighty enough to withstand a siege for 10 years. Male Speaker: The city is probably too small, that it doesn’t fit what Homer describes. Yes, it is wealthy, yes may be powerful, may be some trade, but there aren’t enough people there. It is simply too small. Narrator: Once again, doubters suggested that there might be nothing to the myth at all, that perhaps Homer’s Troy never existed. *****


The independent sovereignty of the city-state was the basic political structure of ancient Greece. Although the governments that ruled the city-states were varied and numerous, the goals these communities strived to attain were similar as described in Politics by the great philosopher Aristotle.

“Every State is a community of some kind, and every community is established with a view to some good; for mankind always act in order to obtain that which they think good. But, if all communities aim at some good, the state or political community, which is the highest of all, and which embraces all the rest, aims at good in a greater degree than any other, and at the highest good.”

Listen to the Witness History audio to hear more about Greek government and philosophy.

Men voting under the watchful eye of the Greek goddess Athena

Learn
Chapter Focus Question
What enduring traditions and institutions did Greek culture extend to most of the Western world?

Early People of the Aegean

The Rise of Greek City-States

Conflict in the Greek World

The Glory That Was Greece

Alexander and the Hellenistic Age 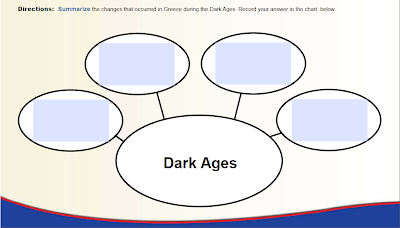