Last year, in an unusual move, Iran's president Ahmadinejad taped a Christmas message to the West. It is not known this year if he plans to do the same. Iran announced Wednesday it has successfully test fired an upgraded version of its longest-range, solid-fuel missile which it said is faster and harder to shoot down.


The missile is named “Sajjil” which means “baked clay,” a reference to a story in the Quran, Islam’s holy book, in which birds sent by God drive off an enemy army attacking the holy city of Mecca by pelting them with stones of baked clay.

Bismarck furthered the crisis by rewriting and then releasing to the press a telegram that reported on a meeting between King William I and the French ambassador. Bismarck’s editing of the “Ems dispatch” made it seem that William I had insulted the Frenchman. Furious, Napoleon III declared war on Prussia, as Bismarck had hoped.

edit—(ed it) v. to make additions, deletions, or other changes to a piece of writing

A superior Prussian force, supported by troops from other German states, smashed the badly organized and poorly supplied French soldiers. Napoleon III, old and ill, surrendered within a few weeks. France had to accept a humiliating peace.

France had a good professional army, which was indeed able to face the Prussians. But a decisive strategic surprise came when all German states took side with Prussia: The French were overwhelmed, outmaneuvered and, in spite of ferocious combats, finally beaten. After Sept. 4th, the new Republic refused to sign an armistice, managed to hastily improvise "armies" out of civilian volunteers, but these were no match for the well-trained Prussians. The war ended when Parisians, besieged, bombarded and starved, surrendered.

The Prussian Army held a brief victory parade in Paris on 17 February, 1871, and Bismarck honoured the armistice by sending trainloads of food into Paris and moving Prussian forces to the east of the city. Prussian armies would occupy parts of France until the French completed the payment of a five-billion francs war indemnity. Then, they would withdraw to Alsace and Lorraine. An exodus occurred from Paris as some 200,000 people, predominantly middle-class, left the city for the countryside. Paris was quickly re-supplied with free food and fuel by the United Kingdom and several accounts recall life in the city settling back to normal.

The war ended up with a complete triumph for Prussia, whose king was proclaimed emperor of Germany in the palace of Versailles — a supreme humiliation of the French and a Prussian revenge on Napoleon's victorious march in Berlin.
The Treaty of Frankfurt gave Germany Alsace and the northern portion of Lorraine (Moselle), where Germanic dialects were spoken by parts of the population. Most importantly, Germany now possessed Metz, a key fortified stronghold between the two countries. Part of the Alsacians refused to live under German rule and emigrated to "inner France".

The loss of this territory was a source of resentment in France for years to come, and revanchism even inspired an attempted coup in Paris in the 1880s. Yet, by 1900, new generations tended to consider it old history, while Alsacians adapted more or less reluctantly to German rule [see Barrès "Au service de l'Allemagne"]. No French political party put forward a reconquest of Alsace-Lorraine in its program. Compensations were found in colonization abroad. When World War I broke out, the French mobilized with the idea to defend their territory as it was, not to take back Alsace-Lorraine, as soldiers' diaries and letters indicate.

Had Germany not taken the option of war in 1914, its successful path paved by the 1870 triumph would have led it to become peacefully the uncontested leader in Europe.

What techniques did Bismarck use to unify the German states?

Birth of the German Empire: Audio

Delighted by the victory over France, princes from the southern German states and the North German Confederation persuaded William I of Prussia to take the title kaiser (ky zur), or emperor. In January 1871, German nationalists celebrated the birth of the Second Reich, or empire. They called it that because they considered it heir to the Holy Roman Empire.

A constitution drafted by Bismarck set up a two-house legislature. The Bundesrat (boon dus raht), or upper house, was appointed by the rulers of the German states. The Reichstag (ryks tahg), or lower house, was elected by universal male suffrage. Because the Bundesrat could veto any decisions of the Reichstag, real power remained in the hands of the emperor and his chancellor.

How was the new German government, drafted by Bismarck, structured?

In 1870, German historian Heinrich von Treitschke (vawn trych kuh) wrote a newspaper article demanding the annexation of Alsace and Lorraine from France. A year later, annexation became a condition of the peace settlement in the Franco-­Prussian War:

“The sense of justice to Germany demands the lessening of France. . . . These territories are ours by the right of the sword, and . . . [by] virtue of a higher right—the right of the German nation, which will not permit its lost children to remain strangers to the German Empire.”

How did Germany increase its power after unifying in 1871?

In January 1871, German princes gathered in the glittering Hall of Mirrors at the French palace of Versailles. They had just defeated Napoleon III in the Franco-Prussian War. Once home to French kings, the palace seemed the perfect place to proclaim the new German empire. To the winners as well as to the losers, the symbolism was clear: French domination of Europe had ended. Germany was now the dominant power in Europe.

What events led to German unification? 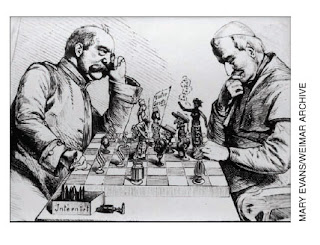 A Political Game of Chess

1. How does this cartoon reflect the relationship between Bismarck and the Catholic Church?

2. How did the conflict between church and state affect German politics in the 1870s?

On the domestic front, Bismarck applied the same ruthless methods he had used to achieve unification. The Iron Chancellor, as he was called, sought to erase local loyalties and crush all opposition to the imperial state. He targeted two groups—the Catholic Church and the Socialists. In his view, both posed a threat to the new German state.


Nationalism and Reform in Europe

Russia
Although serfdom had almost disappeared in Western Europe by the 1700s, it survived in Russia. Masters exercised almost total power over their serfs. A noble turned revolutionary described the treatment of the serfs:

“I heard . . . stories of men and women torn from their families and their villages, and sold, or lost in gambling, or exchanged for a couple of hunting dogs, and then transported to some remote part of Russia to create a [master’s] new estate; of children taken from their parents and sold to cruel . . . masters.”

—Peter Kropotkin, Memoirs of a Revolutionist 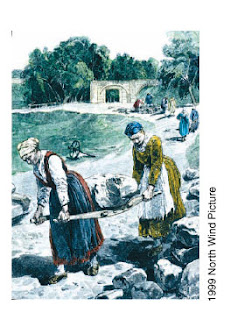 Why did industrialization and reform come more slowly to Russia than to Western Europe?
Reading Check

How was Great Britain able to avoid a revolution in 1848?

Nationalism in the United States 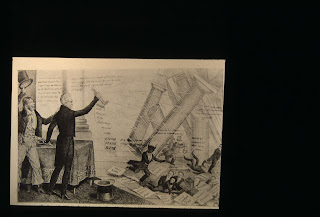 Graphic Notes: "Downfall of Mother Bank," depicting President Andrew Jackson holding up an "Order of the Removal of the Public Money" during the fight over the Bank of the United States, 1833. E.W. Clay lithograph.


Nicholas Biddle was the president of the Bank of the United States during the Bank War of 1832. Biddle held a great deal of unwarranted power over the nation’s finances, which President Jackson resented. When Jackson vetoed a bill to renew the Bank’s charter, Biddle agreed with Senator Henry Clay that this would hurt him in the upcoming presidential election of 1832, but both of them were proven wrong. When Jackson tried to end the bank by withdrawing deposits, Biddle caused a financial panic to try and prevent Jackson from attaining the presidency which failed when Jackson was re-elected.
The Bank War began with Senators Noah Webster and Clay with their Recharter Bill: Clay and Webster presented Congress with a Recharter Bill for the Bank of the United States in 1832. Although four years before the charter would expire, Clay hoped to make the Bank an issue in the upcoming presidential election, which he hoped to win. Clay hoped to quickly pass the Bill in Congress, then send it to the White House to be signed by Jackson. Clay knew Jackson would most likely veto the bill, alienating the elite in the upcoming election, therefore favoring Clay. Jackson did veto the bill, but contrary to Clay’s expectation, gained popular public support for his statement.

The “Pet” banks where surplus federal funds were placed after the closing of the Bank of the United States. The banks were chosen for their support of president Jackson and soon flooded the country with paper money as there was no longer a central, federal finance institution. As a result of the massive amounts of paper money, inflation skyrocketed, and Jackson was forced to try to slow inflation with his Specie Circular.

The Specie Circular (1836) was decreed by Jackson which stated that all public lands had to be purchased with “hard” money, gold or silver. Jackson took this measure to slow the runaway inflation caused by his closure of the Bank of the United States.

How did the election of Andrew Jackson influence American politics?
The divisions between Americans eventually led to fighting in the Civil War.

You can learn more about music from the period by listening to:
"When Johnny Comes Marching Home." In this exercise you can 1) view the exhibit; 2) read the lyrics; 3) learn more; and, 4) rewrite the song.

The Emergence of a Canadian Nation

How did the British North American Act change the government of Canada?

Map: The Dominion of Canada in the Nineteenth Century

Books, web sites, and other resources
Boot delves into the technological impact that inventions, machines, and the two Industrial Revolutions have had on war.

War Made New: Weapons, Warriors, and the Making of the Modern World by Max Boot

The Church in an Age of Revolution by Alec R. Vidler

Join the journey of Lewis & Clark where you can collect specimens as you explore new territories.

Detailed account of the Lewis and Clark Expedition to explore the American continent.

The Age of Jackson by Arthur M. Schlesinger

A novel about the Crimean War: 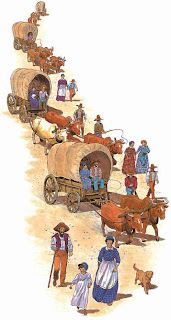 Visit an interactive exhibit about the gold rush.

The Civil War: A Film by Ken Burns

A Political Game of Chess

1. How does this cartoon reflect the relationship between Bismarck and the Catholic Church?

2. How did the conflict between church and state affect German politics in the 1870s?

3. Why did industrialization and reform come more slowly to Russia than to Western Europe?

4. How was Great Britain able to avoid a revolution in 1848?

5. How did the election of Andrew Jackson influence American politics?

6. How did the British North American Act change the government of Canada?