Reporters covering a “Don’t Ask, Don’t Tell” protest at the White House were forced out of Lafayette Square by police. The scene, captured on video, is remarkable given the historical importance of the park as a protest spot across the street from 1600 Pennsylvania Avenue.


"Congress shall make no law . . . . abridging the freedom of speech, or of the press; or the right of the people peaceably to assemble, and to petition the Government for a redress of grievances."

Reading and Listening Skill:
Identify Supporting Details Use a concept web like the one below to record details related to the main ideas of this section. 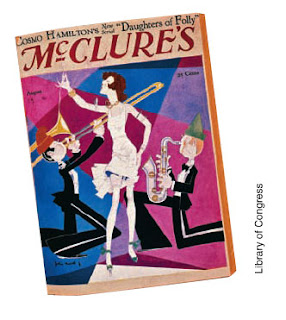 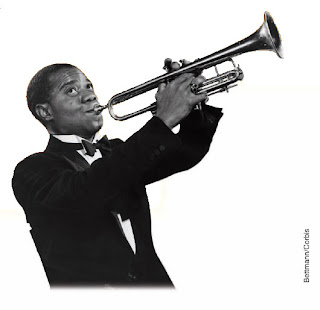 What were people listening to? They listened to a uniquely American form of music: jazz.

In the 1920s, many radios tuned into the new sounds of jazz. In fact, the 1920s are often called the Jazz Age. African American musicians combined Western harmonies with African rhythms to create jazz. Jazz musicians like trumpeter Louis Armstrong and pianist Duke Ellington, took simple melodies and improvised endless subtle variations in rhythm and beat. They produced original music, and people loved it. Much of today’s popular music has been influenced by jazz. 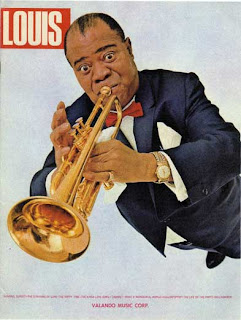 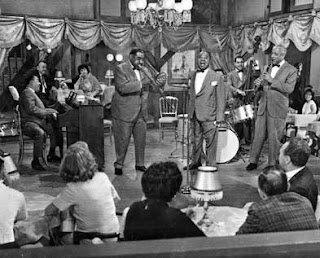 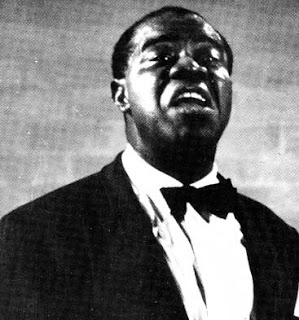 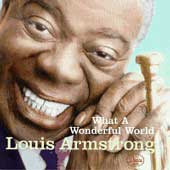 West End Blues is one of the most famous recordings in the history of jazz for the following reasons: 1) Armstrong's introduction showed how dazzling his skills as a trumpeter were; 2) he laid the groundwork for jazz soloists to be considered true artists, the same as musicians in other styles of music and; 3) the recording introduced Earl Hines as the first real jazz pianist, who was Armstrong's equal in creative musical thought.

Activity: Follow the outline below of West End Blues.

With the addition of a tuba and drum set, the Hot Five became the Hot Seven for a series of recordings. Louis Armstrong was the among first to record improvised solos during what jazz musicians call breaks. A break is a pause in the ongoing rhythm of a composition-as happens several times during the clarinet solo. A related musical practice is stop-time, in which the instruments hit typically just one beat per measure. Potato Head Blues provides an excellent example of how Armstrong's natural sense of rhythm made his solos swing.

Activity: Follow the outline below of Potato Head Blues and count the number of breaks you hear.

Heebie Jeebies was one of the first jazz recordings to include scat singing. Armstrong departs from some of the words, instead singing rhythmic "nonsense syllables" called "scat." This recording brought scat singing to the public's attention. The "heebie jeebies" was a popular dance when this song was recorded.

Activity: Follow the outline below of Heebie Jeebies. Listen closely to hear exactly when Armstrong departs from the original lyrics and begins to scat, and when he continues with the words of the song.

What a Wonderful World was one of Louis Armstrong's favorite songs; he loved it. It is one of the few songs he recorded without playing his trumpet; stringed instruments provide the background music. The song became a hit in England, and became popular in the United States when it was featured in the movie, Good Morning, Vietnam, twenty years later. Louis Armstrong loved children; listen to see if you hear feeling in his voice.

Activity: Follow the words of What a Wonderful World. This song is an excellent example of Louis Armstrong's singing style: sometimes he's right on the beat, sometimes just before the beat, and sometimes just behind the beat. Indicate how he attacks the beat beside the verses of the song. Why do you think it was one of Armstrong's favorite songs? Do you think it could become one of your favorites? Write your own poem describing "A Wonderful World."

What a Wonderful World

I see trees of green,
Red roses too,
I see them bloom
For me and you
And I think to myself
What a wonderful world.


I see skies of blue
And clouds of white,
The bright blessed day
The dark sacred night
And I think to myself
What a wonderful world.


The colors of the rainbow,
So pretty in the sky,
Are also on the faces
Of people going by.
I see friends shaking hands,
Saying "How do you do?"
They're really saying,
"I love you."

Find out more about jazz

The earliest celluloid film was shot by Louis Aimé Augustin Le Prince using the Le Prince single-lens camera made in 1888. It was taken in the garden of the Whitley family house in Oakwood Grange Road, Roundhay, a suburb of Leeds, Yorkshire, Great Britain, possibly on October 14, 1888. It shows Adolphe Le Prince (Le Prince's son), Mrs. Sarah Whitley, (Le Prince's mother-in-law), Joseph Whitley and Miss Harriet Hartley. The 'actors' are shown walking around in circles, laughing to themselves and keeping within the area framed by the camera. It lasts for less than 2 seconds and includes 4 frames.

Two brothers, Phil and Ted Stoneman, visit their friends in Piedmont, South Carolina: the family Cameron. This friendship is affected by the Civil War, as the Stonemans and the Camerons must join up opposite armies. The consequences of the War in their lives are shown in connection to major historical events, like the development of the Civil War itself, Lincoln's assassination, and the birth of the Ku Klux Klan.

Why was the radio an important propaganda tool for the Nazis?

The organization had the self-declared goal of creating "a National Socialist Volksgemeinschaft ("people's community") and the perfection and refinement of the German people." It aimed to reach this goal by organizing tight and thoroughly structured recreational programs. Robert Ley, one of KdF's founders, quoted Hitler:

"I wish that the worker be granted a sufficient holiday and that everything is done, in order to let this holiday as well all other leisure time to be truly recreational. I wish this, because I want a determined people with strong nerves, for truly great politics can only be achieved with a people that keeps its nerves."

How did the "Strength through Joy" program help to support the Nazi regime?

During and after the war, the dada movement burst onto the art world. Dadaists rejected all traditional conventions and believed that there was no sense or truth in the world. Paintings and sculptures by Jean Arp and Max Ernst were intended to shock and disturb viewers. Other dadaist artists created collages, photomontages, or sculptures made of objects they found abandoned or thrown away.

Cubism and dada both helped to inspire surrealism, a movement that attempted to portray the workings of the unconscious mind. Surrealism rejected rational thought, which had produced the horrors of World War I, in favor of irrational or unconscious ideas. The Spanish surrealist Salvador Dali used images of melting clocks and burning giraffes to suggest the chaotic dream state described by Freud.

Literature: The Search for the Unconscious


What makes James Joyce's Ulysses so compelling that it continues to attract devoted readers one hundred years after its publication? Joyce to the World explores the global phenomenon known as "Bloomsday" celebrated every year on June 16th, the day the novel takes place.

Celebrate the 100-year anniversary of this amazing tradition when Joyceans around the world open a book, raise a pint, and dress in costume in homage to their fictional heroes. With extensive biographical footage and commentary, viewers follow Joyce from his early life in Dublin to his later years of self-exile with his wife, Nora Barnacle.

Interviews with award-winning actors, writers and scholars including Brian Dennehy, Frank McCourt, Malachy McCourt, Fionnula Flanagan and Senator David Norris, bring audiences inside the artist's mind and explain why so many are drawn to his work. Die-hard fans and those just beginning their exploration of this acclaimed artist will find Joyce to the World a treasured resource for years to come.

Why were artists and writers after World War I attracted to Freud's theory of the unconscious?

The Heroic Age of Physics

How did Heisenberg's uncertainty principle challenge the Newtonian worldview? 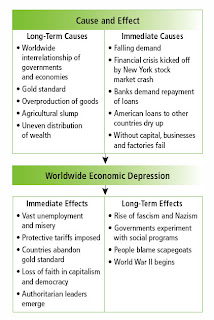 Photo Essay on the Great Depression

Diaries of people who lived during the Depression

People and events of the Dust Bowl

Original photographs from the times

Cf. Click on links to view original documents from Mussolini's life and times.

Read a detailed account of the life of Hitler

Test yourself on how Hitler came to power

Nazi propaganda posters: Election, Sower of peace, 'One People, One Nation, One Leader,' Saving for a Volkswagen, Jews, Anti-Bolshevism.

Stalin and Industrialization of the USSR
See original documents and learn more about Stalin's methods.

Review Stalin's takeover of power from the BBC:

Find out more about jazz

This is the official song of the youth wing of the NSDAP, the Hitler Youth.

Television broadcasting in The Third Reich

Hitler Speeches and Wagner Music, from the documentary "Triumph of the Will", footages of Hitler's speeches with Wagner (Ride of the Valkyries).


How To Take Effective Notes
Email to gmsmith@shanahan.org

Last week, what I liked least about the class was . . .

Last week, what I liked most about the class was . . .