The lesson plan references a well-know Soviet plan about "Five Year Plans," a scheme by which the government planned to improve the lot of the people.

The phrase about "five year plans" was popularized in American culture by the rock band Creedence Clearwater Revival. "Who'll Stop the Rain" 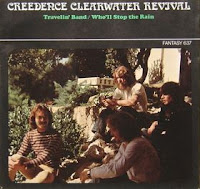 is a song written by John Fogerty and originally recorded by Creedence Clearwater Revival for their 1970 album Cosmo's Factory. It was one of three double sided singles from that album to reach the top five on the U.S. Pop Singles Chart and the first of two to reach the #2 spot on the American charts. In 2004, Rolling Stone ranked it #188 on its "500 Greatest Songs of All Time" list.

During 1970, right after the Great Society programs of LBJ and of course the resigned but somewhat angry feeling of the song, many see "Who'll Stop the Rain" as a thinly-veiled protest against the Establishment, with the final verse referring to music, large crowds, rain, and crowds trying to keep warm, indicative of the band's experience at the Woodstock Festival in August of 1969.

There is also a line during the song's second verse about "five-year plans and new deals wrapped in golden chains" that may indicate a general cynicism altogether about all politicians. I believe Fogerty was much more specific in his target, and based on his working-class Catholic roots, and general aversion to all politicians, both on the left and the right, he had a more focused target.

He opposes government intervention of any sort. Note that "five year plans" is an obvious reference to the First Five Year Plan (1928-33) of the Soviet example, an obvious target, but Fogerty continues against "new deals," a more pointed critique of a generally popular American plan of FDR. Yet Fogerty equates the two schemes in one line of the lyrics. He is opposed to any government intervention or plan, whether the leftist Soviet variety or the New Deal American president type. Note that both are described as: "wrapped in golden chains." The issue is scarcity and both the Americans with FDR, and the Soviets with Lenin and Stalin, controlled their respective societies, limited freedom, and re-distributed social production.

In any case, the half-minute long fadeout of the song, which reprises the repeating guitar pattern from the intro, seems to reinforce the song's main theme of the 'rain' continuing to go on, interminably, as one politician after proposes one idealist plan after utopian scheme right up until the present.

Long as I remember the rain been comin' down.
Clouds of mystery pourin' confusion on the ground.
Good men through the ages, tryin' to find the sun;
And I wonder, still I wonder, who'll stop the rain.

I went down Virginia, seekin' shelter from the storm.
Caught up in the fable, I watched the tower grow.
Five year plans and new deals, wrapped in golden chains.
And I wonder, still I wonder who'll stop the rain.

Heard the singers playin,' how we cheered for more.
The crowd had rushed together, tryin' to keep warm.
Still the rain kept pourin, fallin' on my ears.
And I wonder, still I wonder who'll stop the rain.

Lyrics are quoted for educational purposes only; the copyright remains in the hands of the lawful owner.