The production possibilities curve is often described as the issue of `guns vs. butter,' or a model illustrating the relationship between a nation's investment in defense and civilian goods. The model is obviously simplified for the purposes of a graph but it illustrates how much a society should devote to defense and military spending as opposed to how much a society should devote to consumer products and goods.

The origination of the actual phrase is not known but one well-known theory is that it arose from populist and reformer William Jennings Bryan's (March 19, 1860 – July 26, 1925) 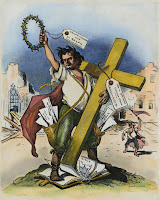 A Republican satire on Bryan's "Cross of Gold" speech.

Graphic source: this image is in the public domain due to its age.

resignation as secretary of state in 1915 during the Wilson Administration. At the outbreak of World War I, the leading global exporter of nitrates for gunpowder was Chile. Chile had maintained neutrality during the war and provided nearly all America's nitrate requirements, as it was also the principal ingredient of chemical fertilizer in farming. The export product was sodium nitrate, a salt mined in northern Chile.

With substantial popular opinion running against U.S. entry into the war, the Bryan resignation and peace campaign (joined prominently with Henry Ford's efforts) became a banner for local against national interests. Bryan was no more pro-German than Wilson; his motivation was to expose and publicize what he considered to be an unconscionable public policy.

The National Defense Act of 1916 directed the President to select a site for the artificial production of nitrates. It was not until September 1917, several months after America entered the war, that Wilson selected Muscle Shoals, Alabama,

after more than a year of competition among competing political rivals. A deadlock in Congress was broken when Senator Ellison D. Smith from South Carolina sponsored the National Defense Act of 1916 that directed "the Secretary of Agriculture to manufacture nitrates for fertilizers in peace and munitions in war at water power sites designated by the President." This was presented by the news media as an issue between "guns and butter."

Cf. "Now muscle shoals has got the Swampers" (the studio band) in the song "Sweet Home Alabama" by Lynyrd Skynyrd (by the way of mockery, deliberately misspelling the name of their unpopular high school physical education teacher).

Muscle Shoals long has been associated with a rich cross-pollination of musical styles that originated in the area. Black artists from the area (Arthur Alexander

Arthur Alexander, "You Better Move On"

are ideal examples) who utilized white country music styles in their work and white artists from the Shoals frequently borrowed from the blues/gospel influences of their black contemporaries, creating a generous melting pot of music.

In the early rock 'n' roll era, Sam Phillips, founder of nearby Memphis-basedSun Records, lived in the area and, and stated in his autobiography that Muscle Shoals (primarily radio station WLAY (AM), which had both "white" and "black" music on its playlist) influenced his merging of these sounds at Sun Records with Elvis Presley, Jerry Lee Lewis, and Johnny Cash. Also based in Memphis is the creative and related black and white concoction originating from Stax Records.

Thereafter, during the rock era, the Beatles were influenced by Arthur Alexander,

recording his "Anna (Go to Him)," a song written and originally performed by Alexander. His version was released as a single by Dot Records on 17 September 1962.

Not to be outdone, the Rolling Stones also recorded and performed live Alexander's,

"You Better Move On."

Another British invasion band, the Hollies, also recorded "You Better Move On" in 1964.